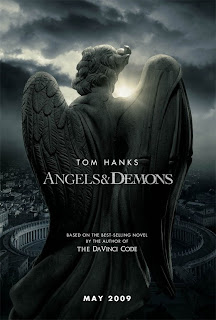 Papal bull (****).
This afternoon I went to see "Angels and Demons" with some friends because we wanted to see some pretty scenery and weren't feeling too picky about plot. Good thing that we weren't.

This sequel to "The Da Vinci Code" is such preposterous rubbish that it's unintentionally hilarious at times. Oh, I knew it was going to be garbage. I went to go see the city of Rome, both real and re-created, and to giggle at the flick with my buddies -- and I did just that. (Why, yes, we went for a matinee so we wouldn't have to pay full price. We knew it was going to be bad!)

For an idea of just what a ludicrously contemptible narrative mess this flick was, try reading this review or, even better, this fabulously furious takedown by a British critic. The ever-readable Kurt Loder disassembles it adroitly and adds an astute observation of which religions are OK to offend in Hollywood and which aren't.

All I'm going to say is: anti-matter shows up in the script. Anti-matter? Is this flick suffering from "Star Trek"-envy? Well, it SHOULD. Trek was a great bit of entertainment. "Angels and Demons" will make you laugh -- precisely because it doesn't intend to. It's a towering inanity all around.

Tom Hanks' unbelievably boring Harvard professor character is the anti-Indiana Jones. By this point, Harvard's probably wishing that Dan Brown had identified the Langdon character as a Yalie instead -- hey, let some other campus get stuck with this pompous, pedantic windbag! And poor old Ewan McGregor. As an energetic young papal aide, he's the only character who seems to have even a faint glimmer of a personality, and he (spoiler alert) naturally turns out to be a total psychotic nutcase who finally decides he'll get a head start on going to hell by setting himself on fire. Well, that wasn't quite what I meant when earlier I'd said that McGregor could be kind of hot.

Grade for the flick: C. Rotten Tomatoes gives it 37%.

Also, a public service announcement: Dan Brown is a complete and shameless hack who has made his fortune from mangling every kind of history and from marketing a blatant hostility to the Roman Catholic Church that I (not a Catholic) find completely revolting.
Posted by Mad Minerva at 10:47 PM

Hey, thanks for seeing this so I don't have to. Not that I would have, mind you.

And a 'C'? Have you been infected with grade inflationitis, or are you giving it bonus points for being unintentionally funny? ;-)

That's very post-mod of you.

I hadn't thought about the Rome image angle; cinematography does count.