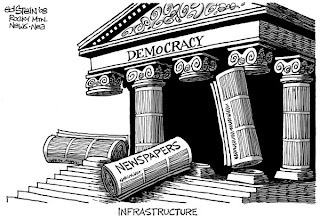 Read the 2009 edition of Freedom House's annual press freedom report (if you like charts, look at this PDF) and then read this analysis.

See this editorial by Leon Chuang, chairman of the Association of Taiwan Journalists. He writes, among other things:

The lesson is that if Taiwan’s media cannot resist penetration by China, Taiwan will before long go the same way as Hong Kong.

President Ma Ying-jeou and his government should bear full responsibility for this black mark on the record of their first year in office.

Hong Kong's press freedom rating, by the way, has dropped from "free" to "partly free." China, in case you're wondering, is rated "not free" by Freedom House.

Things do not look good at all for either HK or Taiwanese media. Wake up, people.
Posted by Mad Minerva at 5:21 PM