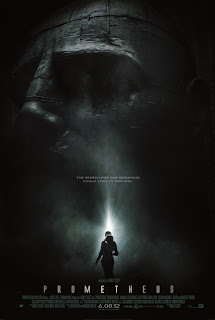 "You still don't know what you're dealing with, do you?"


Yup, I was there opening weekend.  Ridley Scott's Prometheus is visually spectacular, though in narrative terms, it has some substantive problems, and overall its ad campaign promised far more than the film itself could deliver.  It tried to take the monsters-in-space, body-horrific theme of Scott's 1979 Alien and then add some ambitious (and - let's face it - rather pretentious) metaphysical aspects about the origin of humanity, and the result is definitely a mixed bag.  There were gaps in logic and also moments of characters doing things so astronomically stupid that I wanted to throw popcorn at the screen.

Still, if you want some half-cover-your-eyes, cringe-in-your-seat, creepily and gloriously disgusting slimy xenobiological horror, you've come to the right place.  There's certainly some fuel for nightmares in here!  I'll do a full review soon, but for now I'll just say that the best thing about it acting-wise is Michael Fassbender as the ambiguously motivated android David, and the most memorably harrowing scene involves medical equipment in an enclosed space.  Rotten Tomatoes gives Prometheus a Fresh rating of 74%.  I'll give it a B.  It wasn't bad, but it should have been better, and that kind of unrealized potential is itself a kind of failure.

'though in narrative terms, it has some substantive problems'

Well, it can't be any worse than Transformers 3. That movie had the least logical plot I have ever seen. It made no sense whatsoever. But nowadays no one seems to care that a story actually makes any sense.

By the way, what does all of this have to do with the legend of Prometheus anyway? That’s a very unique metaphor with a very specific purpose and one of the very ‘best’ of the Greek myths; the symbol of progress and resistance to tyranny. It sounds like they just picked the name because it sounded cool and used it without any understanding of what it means.

I don't think Hollywood is capable of putting together a coherent plot anymore and they destroy every story or myth they touch by their hopeless ineptitude.

Just got done watching it and I can’t say I was all that impressed with what I saw. Yeah, it had its moments that were tense and a little freaky but it never fully got off the ground for me. However, it’s a beautiful film the whole way through and one that should definitely be seen in 3D no matter wherever you may be. Good review.