This VP Debate is a Biden Train Wreck

Good grief!  Biden is vacillating between being a creepily grinning clown and being a rude, condescending, interrupting jerk.  Meanwhile, Ryan's coming across as an earnest accountant trying patiently to explain math to a shrilly aggressive blockhead. Best line so far is Ryan's: "There aren’t enough rich people and small businesses to tax to pay for all their spending."

As for the Biden performance?  This is symptomatic of the dynamic:

Biden, flailing: "Nobody's ever done this!!!"

I don't know how much longer I can watch this.  Martha Raddatz can't rein in Biden, and it's embarrassing.  Well, there's always the drinking game, Vodkapundit's drunkblogging this debate, and law prof Ann Althouse's liveblogging.  Given the choice between the cool, calm, earnest Ryan and the shrieking Biden, I know whom I'd pick.  Here's a news photo hot off the Internet: 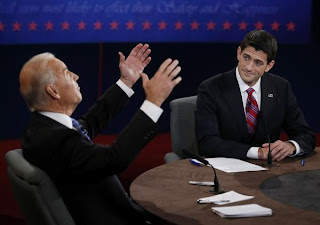 Oh, boy, this one's even better.

Come on, Ryan, hammer Biden on the administration's indefensible record.  Right now he's smacking him with Obama's broken promises.  More of this, please, plus: "We have to tackle the debt crisis before the debt crisis tackles us."

You know, the only thing keeping me watching is simultaneously watching Twitter.

PS: Ryan notes that 23 million people are struggling for work.  Let me put it to you this way: That is the entire population of Taiwan.

Whoop!  I made it through the debate with my brains only slightly scrambled while my ears keep on ringing from Biden's endless screeching.  Raddatz did a horrible job moderating.  Ryan's closing statement was good.  I think he won but not crushingly, partially because of the endless awful interruptions and Biden's sheer disrespect.  Still, advantage Romney-Ryan.  Peace, out.  Oh - one more thing.  The Onion strikes again.   One more more thing: Thank goodness the drinking game wasn't "take a drink every time Biden smirks/laughs" or "take a drink every time Biden interrupts Ryan."  That'd be almost 1 drink for each of the 90 minutes of the debate.
Posted by Mad Minerva at 9:58 PM