I am aliiiiiiiiiiiiive, but desperately busy.  Still, I promised La Parisienne a review of Gone Girl, so here it is, very late and several weeks after I saw it, but finally posted! 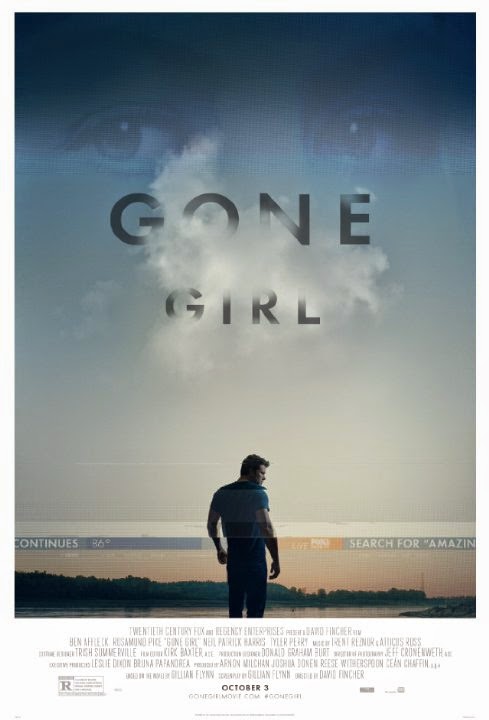 The female of the species.

Director David Fincher's Gone Girl, the psychological thriller/crime drama, is based on the best-selling novel of the same name (a book that I have not read), and author Gillian Flynn also wrote the screenplay.  The result is a film that did something that no other film has managed to do for a while: keep me guessing about what was going on and what was going to happen next.  Gone Girl has its flaws (some of which are significant), but Rosamund Pike and Ben Affleck (yes, La Parisienne, behold my actual, sincere praise for Affleck's acting!) will keep you riveted by their performances as Amy Dunne and her husband Nick, the two halves of a decaying marriage.  When on their fifth wedding anniversary Amy disappears from their home, suspicions of foul play soon swirl around Nick.

I can't give you much more detail of the plot because I would ruin the movie viewing.  As the storyline begins to unspool, you have to pay attention.  This is because of unreliable narrators, or at least biased accounts: both Amy and Nick soon emerge as deeply flawed people, their marriage a tale of the slow rot setting in after a passionate (almost too passionate) start.  We see Amy's perspective as a series of voiceovers: we soon realize she is reading aloud from her diary, the entries handwritten in curlicue letters with a feathery pink pen.  After a while, the swooping swirls of that almost too-girly pen start getting to you, or at least it did to me.  Hearing Pike's disembodied voice, slow, calm and sometimes verging on the creepily melodic, is like hearing the voice of a phantom.

We see Nick's point of view from watching him in the aftermath of Amy's disappearance, and this is where casting Ben Affleck was a stroke of genius for this character.  Affleck somehow always seems a little shifty, a little (or a lot) insincere, a little untrustworthy no matter what character he's playing.  There's something off about that squint and that handsome, lopsided grin, and the movie plays this to utter advantage.  The rumple-haired, clearly nervous Nick Dunne soon begins to rub you the wrong way ... but (and this is crucial) is he actually capable of cold-blooded murder?

The movie then dives headlong into satire with its depiction of the ever-increasing, ever more insane media circus, right down to Missi Pyle as bleached blonde cable demagogue Ellen Abbott, an obvious caricature of shrill pseudo-news harpy Nancy Grace (wait, is it even possible to caricature someone who is already a caricature?).  She's counterbalanced by agelessly elegant Sela Ward as a more respected but still emotional string-pulling Barbara Walteresque interviewer. The media angle is even further abetted by the publicity efforts of Amy's overbearing parents.  The message is pointed about the role of the sensationalist media in both reporting a news story and then, with its obsessively ravening desire to dig up the dirt, transmogrifying an initial incident into the nearly unrecognizable howl of a mob.

The entire apparatus comes across as being addicted to every sordid, disgusting detail it can find ... or insinuate without proof or simply make up.  The media becomes almost a living creature, a monstrous screeching vulture with an ever-widening gullet for gleefully gulping down indiscriminate filth and vomiting it back out over a larger and larger radius.  You can't help but feel that somewhere in all this Nick's actual story and any pretense at objective reporting are lost as Abbott and her ilk push their chosen narrative of sweet innocent vanished Amy and wicked dirtbag husband Nick.  The thing turns into a witch hunt.  There is a fascinating scene of celebrity lawyer Tanner Bolt (Tyler Perry in an incredible turn) coaching Nick before an interview.  When a slimeball attorney who (famously!) specializes in getting guilty people off is the only sensible one in the room, you're pretty much screwed whether you're actually guilty or not.

Pay attention also to fine performances by Carrie Coon as Nick's harried twin sister Margo and Kim Dickens (recently of Sons of Anarchy) as the detective on the case.  Neil Patrick Harris also appears, though somehow that particular casting choice did not sit too well with me, however much I like Harris. Part of the action with him almost descended into camp, but that is not a complaint confined only to him but to the third act as a whole.  Still, with Fincher in the director's chair, it's very stylish, evocative camp that looks and feels better than its substance might actually deserve.

In fact, Fincher's direction and the art direction elevate the movie to what will probably be award-winning levels, even if - if you get right down to it - the premise of vanished pretty wife and shifty husband-suspect in a whited sepulcher of a marriage is really a genre trope and a melodramatic one at that.  Still, Flynn and Fincher push the genre to the limits and - one could well argue - break it in the end.

Mad Minerva gives Gone Girl a grade of B+ . Points off for a messy, often excessive third act and for the fact that this is the kind of movie you watch once.  You can't ever recapture the thrill and suspense of wondering what will happen next.

RottenTomatoes gives the movie the bona fide Fresh rating of 88%.

Gone Girl runs 149 minutes and is rated R for violence (there is one particularly graphic scene), pervasive language, nudity, and some sexual situations.

Posted by Mad Minerva at 8:00 AM No comments:

Quote of the Day: The Strategic Value of Threat Deflation

From a lengthy essay by a professor of national security comes this thought:


... the rhetoric about ISIL has given the group prestige it does not deserve. Washington may inadvertently help ISIL’s recruiting efforts by hyping its capacity for mayhem.

... The group has already proven adept at propaganda; it does not need our help and we should not give it.

Apparently Thomas Friedman is now quoting from The Dark Knight in an attempt to explain ISIS and Boko Haram.  An entire quarter of  his "analysis" is just lines from the movie. Dude, seriously?

Still, here's a retort worth repeating:

Just Another Day's Work For the US Coast Guard

Check out the photo!
Posted by Mad Minerva at 6:23 PM No comments:

Email ThisBlogThis!Share to TwitterShare to FacebookShare to Pinterest
Labels: buckets of crazy, Coast Guard, Florida, to the rescue, weird with crazy on top

Yeah, it's a thing.  Those fried leaves look good, though!  I wouldn't mind trying them.
Posted by Mad Minerva at 11:01 AM 1 comment:

Oh, sure, I would probably last about 3 seconds in an actual zombie apocalypse, and I hate the undead (though Shaun of the Dead is a hilarious movie and World War Z a far better book than flick).  Still, there's a lot to love in a show that has a Korean American pizza delivery guy turned action hero (Steven Yeun), a taciturn African American woman (Danai Gurira) who wields a mean katana (!), and a crossbow-toting, squirrel-hunting redneck who manages to steal the show even though he doesn't get all that much screen time (fan favorite Norman Reedus as Daryl).  The ostensible lead, small-town cop Rick Grimes (Andrew Lincoln), sometimes seems almost beside the point. 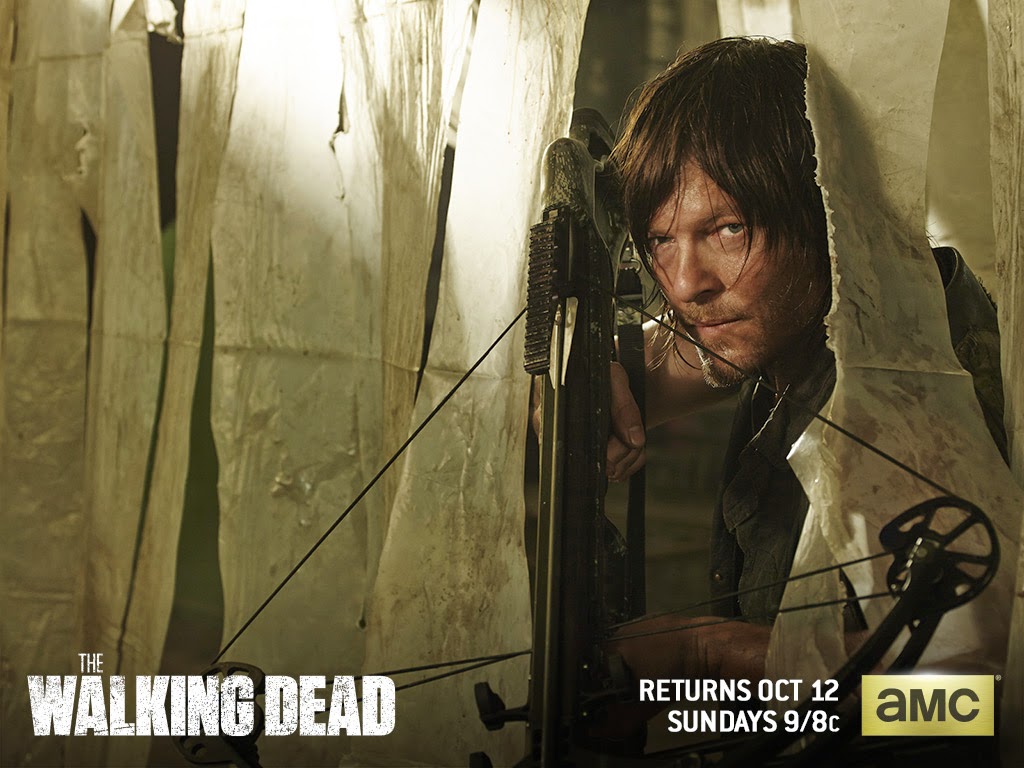 The Walking Dead also refreshingly set in a place other than New York and Los Angeles: the show starts off in Atlanta and takes off into other spots in Georgia where it's filmed on location.  So check it out if you're in the mood for a zombie apocalypse, and remember: you have to stab/shoot/bash the zombies IN THE HEAD or else they'll just keep coming.  Also remember: you can never have too much ammo during a zombie invasion, so stock up!
Posted by Mad Minerva at 9:02 PM 1 comment:

MM in the Kitchen: Apple Tart

It's apple-picking time, so here's one thing you can do when you get home: make a honeycrisp apple and browned-butter tart.
Posted by Mad Minerva at 6:01 PM No comments:

Email ThisBlogThis!Share to TwitterShare to FacebookShare to Pinterest
Labels: baking, fruits and vegetables, MM in the Kitchen, recipes, sweets and desserts

It ain't me, babe. It's a bunch of Swedish scientists.
Posted by Mad Minerva at 7:54 PM No comments: