Friday Fun Video: An Honest Trailer for "Inside Out"

I loved Pixar's Inside Out, but it, like all movies, is fair game for the famous Honest Trailers treatment!

Well, good, because it was a stupid, evil, destructive policy in both the short and long term that has caused untold amounts of human misery and social damage.
Posted by Mad Minerva at 8:47 AM No comments:

*gigglesnort*
Posted by Mad Minerva at 9:15 PM No comments:

Rejoice, baseball fans!  Arguably even better: watching my pro-Royals friends face off against the pro-Mets ones.  All's fair in love and war ... and baseball fandom.
Posted by Mad Minerva at 8:56 PM No comments:

It is the 600th anniversary of the Battle of Agincourt that was immortalized in Shakespeare's Henry V.  Here's that famous speech delivered by Kenneth Branagh:

I'm resurrecting the sarcastic "Great Moments in Research" tag to report yet another massive scandal in scientific research publication.  Ugh:


In August 2015, the publisher Springer retracted 64 articles from 10 different subscription journals “after editorial checks spotted fake email addresses, and subsequent internal investigations uncovered fabricated peer review reports,” according to a statement on their website. The retractions came only months after BioMed Central, an open-access publisher also owned by Springer, retracted 43 articles for the same reason.

“This is officially becoming a trend,” Alison McCook wrote on the blog Retraction Watch, referring to the increasing number of retractions due to fabricated peer reviews. Since it was first reported 3 years ago, when South Korean researcher Hyung-in Moon admitted to having invented e-mail addresses so that he could provide “peer reviews” of his own manuscripts, more than 250 articles have been retracted because of fake reviews — about 15% of the total number of retractions.

From the Trenches of WWI to the Hundred Acre Wood

Did you know this about Ernest Howard Shepard, the man behind the charming original illustrations for Winnie the Pooh?
Posted by Mad Minerva at 9:53 AM No comments:

I guess it does take some nerve to come right out and say this smack in the middle of the hype over the latest Star Wars trailer:


"... allow me the heresy of suggesting that all this craziness is over a movie. A movie that no one has yet seen. A movie based on another movie that was a great deal of fun 38 years ago and certainly stands as a major event in modern pop history, with or without the sequels, but that was — you may now ready the rocks for stoning — hardly a great work of cinema."

The writer then posits "the Footie Pajama Theory," which even though it does make sense, can't help but seem a little ... what's the word? ah, yes, condescending ... because of its very name.

Well, everyone is entitled to his or her own opinion about Star Wars and everything else.  I'm going to allow myself the hope that the new movie is better than the abominable prequels and their most egregious error.  I'm hoping that when the new movie premieres we can all have a little fun along the way.  I'll leave you with this:

Posted by Mad Minerva at 9:45 AM No comments:

This Is All That Everyone Can Talk About Right Now ... and Justly So

Posted by Mad Minerva at 8:02 AM No comments: 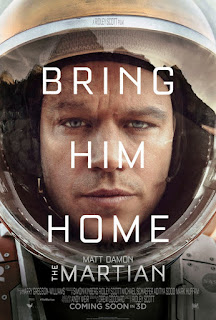 The Martian is the brilliant younger sibling of 1995's sterling Apollo 13: both are tales that begin with disaster in space and go on to showcase human resilience, intelligence, creativity, ingenuity, and perseverance, bolstered by excellent all-star casts.  The Martian, though, has something not even Apollo 13 had: a hilarious streak of sass, along with bar none the best soundtrack since last summer's Guardians of the Galaxy.  While you may be tempted to compare The Martian with Interstellar in terms of gorgeous art direction and massive scope, it would be a misleading comparison: aside from the common denominator of rescuing Matt Damon, the two space epics could not be more different in personality.

This is the best space-themed film I've seen in years (remember what I actually thought of Interstellar?).  In fact, The Martian is the best film I've seen in all of 2015 with the possible exception of Inside Out tying for top honors.  This space epic is engaging, exciting, moving, and as emotionally intimate as it is narratively huge.  The premise is deceptively simple: Astronaut Mark Watney (Matt Damon) is accidentally left behind on Mars when his team returns to Earth, and the entire film is fundamentally about his efforts to survive: one man on the Red Planet.  It is about working the problems and thinking your way to solutions, one problem and solution at a time in the face of adversity, about applied human intelligence, the refusal to give up, and the determination to invent and adapt in the face of inevitable setbacks.  I honestly can't tell you how delighted I was with this.   This is a great metaphor for life itself, and this is also the smartest, geekiest, nerdiest movie all year.

Lest you think this flick is all a big soulless egghead tech fantasy, the movie also does an excellent job of never letting you forget the human element: Damon's running commentary, via video logs and satellite-transmitted text messages to NASA, is pure gold.  His Watney is no abstract figure or heroic intellectual cipher.  He is touchingly human, and his personality shines through in glorious fashion.  At one moment, for instance, he says with feeling, "F*ck you, Mars!" and the effect is more comic and empathetic than crude and offensive.  In fact, the entire movie is shot through with unexpected humor.  Some of it is bravado laughing in the face of impossible, terrifying odds, but much more of it is Watney's appealingly irrepressible personality manifesting itself with wit and sass that is literally out of this world.  Well, being left for dead on a lifeless planet is no reason to lose one's sense of humor, darling!  In fact, the movie is heavy on sass and science and very light on schlock and sentimentality, and if you throw in that aforementioned soundtrack too, then I think this movie is my spirit animal.

The plot soon multiplies out into  a number of interrelated subplots on Earth and in space, each with its own characters and complications, but the movie (to its credit) never loses sight of the centrality of Watney.  He is the tiny, lonely, spacesuited figure toiling in the sweeping, rust-colored Marscape, and you will be riveted by his efforts in which failure is not an option.  The film runs a little more than 2 hours, but it seems to race by, thrillingly, absorbingly, beautifully paced.

Mad Minerva gives The Martian a grade of A+.  I don't usually associate October with the release of Oscar contenders (Crimson Peak's Halloweeny atmosphere is more like it), but I think we can all expect to see The Martian compete in a few Oscar categories.

The Martian runs 144 minutes and is rated PG-13 for language, brief nudity, and a few frightening images.

Rotten Tomatoes gives The Martian the indisputably Fresh rating of 93%.