Sorry, darlings, I've been busy with the Olympics and getting ready for school, but very quickly, since it's Friday and you might be heading off to the movies ...

Here are some micro-reviews:
Posted by Mad Minerva at 4:22 PM No comments: Links to this post

The University of Chicago Welcomes the Class of 2020

And does so gloriously. Would you like to read more about the University's robust commitment to free inquiry and expression?  Of course you do!

Granted, it's kind of sad that it even has to declare something that should be obvious at a university, but in this day and age ...

Oh, and here's a bit from the letter to incoming freshmen (or do I now have to say "freshpeople"?):


"Our commitment to academic freedom means that we do not support so called ‘trigger warnings,’ we do not cancel invited speakers because their topics might prove controversial, and we do not condone the creation of intellectual ‘safe spaces’ where individuals can retreat from ideas and perspectives at odds with their own."

Posted by Mad Minerva at 3:52 PM No comments: Links to this post

DIY rescues down in flooded Louisiana. That's some can-do spirit, initiative, and neighborly feeling: see a problem, do something about it, save some stranded folks.
Posted by Mad Minerva at 9:38 AM No comments: Links to this post

I don't know about you, but I've about had enough of the various lunacies in Olympic broadcast coverage. Sometimes the most interesting things are elsewhere. Check out this writeup about Team Japan that I just found.

Currently Japan is sitting pretty in Rio with 33 medals, 10 of them gold.
Posted by Mad Minerva at 9:28 AM No comments: Links to this post

From Rio: A Tale of Two Images in Sportsmanship

The Egyptian judoka refusing to shake his Israeli opponent's hand vs. the gymnasts from North and South Korea taking a selfie together.

Posted by Mad Minerva at 6:45 PM No comments: Links to this post

Email ThisBlogThis!Share to TwitterShare to FacebookShare to Pinterest
Labels: can't we all just get along, photography, Rio Olympics, sport, Twitter

The NBC Olympic commentators have been - as a collective - ludicrously bad this time around. I couldn't believe I actually read these words just now about the US women's gymnastics juggernaut led by Simone Biles and Aly Raisman:


The commentators, whose voices normally bounce with enthusiasm, sounded suddenly weary. Would people care about a competition that wasn’t competitive? Would they grow bored of greatness? Or, as one of them plaintively asked, "How many times can you say ‘Wow!’ and ‘That was amazing!’?"

What kind of question is that? As my buddy Alessandra says, "There's no kill like overkill."  When greatness is on full glorious display, you don't ask why. You watch and are glad you were there!

By the way, commentators, let me suggest this.  On second thought, if you can't come up with words, then just be silent. That alone would improve the broadcasts immeasurably.
Posted by Mad Minerva at 4:40 PM No comments: Links to this post

Posted by Mad Minerva at 4:23 PM No comments: Links to this post

Email ThisBlogThis!Share to TwitterShare to FacebookShare to Pinterest
Labels: birds, Friday Fun, fun, humor, the Internet is for cats, video

The Awesome Diversity of Team USA

Here's something you might not know! 48 members of Team USA were born in 30 different countries on 6 different continents. The melting pot is in the hunt for medals in Rio!
Posted by Mad Minerva at 4:19 PM No comments: Links to this post

Lawd, another Monday.  Here's a little Shakira to help get you ready to face another work week.   The song is featured in the animated movie Zootopia, so that's why the Colombian songbird appears as a gazelle with hips that don't lie.


By the way, Zootopia is probably the best movie I've seen this entire disappointing year of films.  No, really!  I'll try to write a full review, but it's an A+ movie.  It's also now on DVD, so hop to it!
Posted by Mad Minerva at 9:00 AM No comments: Links to this post

HAHAHAHA - Apparently this is for real!  DC fans have started a petition to shut down movie review aggregator site Rotten Tomatoes because the collected reviews for Suicide Squad stink.  Isn't that like shooting the messenger?

Personally, I've about had enough of DC movies. The idiotic and grimly pretentious Batman-Superman smackdown was stupid and awful, and I said so at the time.  After that mess (how did you screw up both Superman and Batman so badly at the same time? AND Lex?) I lost all hope that Suicide Squad could be any good.  After this latest kerfuffle I think I'll just save my money ... and maybe go see the new Jason Bourne flick instead. (Here's just one review out of hundreds.  The phrase that caught my eye: "Suicide Squad amounts to an all-out attack on the whole idea of entertainment.")  The DC movie universe is a joyless, grayscale cesspool where fun goes to die be brutally murdered.  In the rain.

Besides, this little temper tantrum by fans about reviews is pretty indicative about how DC as a wider community can't get its priorities straight.  Usually I'm slamming the studio and execs, but today my target is DC fans, and my accusation is the same.  Your priorities are all screwed up, dude.  How about you take your rage out on DC for making a crappy movie that reviewers hate instead of on reviewers for hating a crappy movie?  DC bigwigs:  How about you quit making crappy movies?

Here's something relevant that made me laugh out loud: 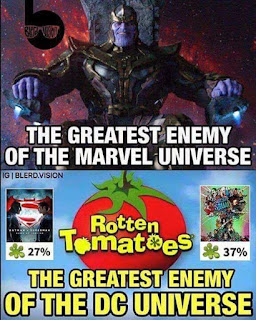 Anyway, the only thing the DC moviemakers are doing with any effectiveness is driving me into the arms of Marvel.  Ah, Marvel, fun, colorful, freewheeling, quippy, whose problems and peccadillos now seem like mere nitpicking trivia after the sort of total self-immolation DC keeps performing.  How's this for a conspiracy theory: DC's movie division is run by a cabal of Marvel undercover agents who have managed to infiltrate DC at the highest levels and who have been tasked with destroying DC root and branch.  Seriously, DC couldn't be doing a better job of alienating its fans and destroying itself if it were trying.
Posted by Mad Minerva at 4:25 PM No comments: Links to this post

Now here's a fun ad!  You may recognize the narrator. That's Oscar "Poe Dameron" Isaac. Keep an eye out for famous cameos, too.

Posted by Mad Minerva at 11:56 AM No comments: Links to this post

The Rio Olympic train wreck hoopla's about to start, so it's time to cut to the chase: here's a half-snarky ranking of all the Olympic events so you can plan to watch or not watch.  By the way, I totally don't think equestrian sports should rank so low ... Then again I'm living up (or down) to the stereotype that girls love horses, right?

Also: some sports are pretty much servings of world-class eye candy.  Let's make a deal, ladies and gents: let's not accuse each other of ogling and objectifying so we can get on with watching - respectively - men's water polo and women's beach volleyball, OK?

I might not have much free time these days, but I will be watching the opening ceremonies tonight because - get real - I can't resist making stupid comments, especially about fashion choices in the Parade of Nations.  Every time at least one delegation wears (designer!) clothes that look like they were pulled out of Rio's festering, disease-ridden waste dump of an ocean.  Still, perhaps this year's most fashion-forward outfit might be mosquito netting.

By the way, I will also assuredly be punching the mute button on my remote control A LOT.  For the most part the TV commentators are completely insufferable. Bob Costas at least has a streak of sassy smart-aleck that makes him occasionally entertaining, but the others are an undifferentiated mass of Joker-like Botox grins and inane hype-spewing chatter.

I may not have reached this point of grumpiness, but I'm getting really close.  I do think this argument has some substance to it, by the way, especially given that the IOC is now approaching FIFA-level amounts of scandalous self-absorption, corruption, and Scrooge McDuck-like piles of money.

Sweet Christmas, I'm getting annoyed just writing this post.  I have no real interest in the Rio Games other than a morbid desire to see whether they (and the media coverage) are going to be as horrendous and silly as I think they're going to be.  Oh, all right, and also because anything's an improvement on the current nonstop media coverage of Hillary and Trump.  Yup, coverage of an actual toxic stew of sewage and trash is still better than coverage of those two figurative toxic stews of sewage and trash.

Oh, all right. One last thought: on the up side. You all know that I hate the "everyone's a winner" sappy mentality of school culture where everybody gets a trophy just for showing up.  At least the point of the Games (the brutal REAL point, not the happy-slappy propaganda talking point) is flat-out WINNING. For the next two weeks, despite all the inevitable nonsensical claptrap about whatever and retch-inducing images of NBC broadcasters attempting to samba, we're also going to get coverage about athletes training and working hard and having goals and being dedicated and embracing discipline and aiming for excellence.  We're going to get coverage of just how bloody hard it is to get really good at something.  And I'm all for that as an antidote to the milquetoast, maudlin approach that celebrates general mediocrity.  Hey, thrill of victory and agony of defeat and all, competition and contest, winners and losers on the field, and even if you didn't win, you worked and trained and competed hard in the attempt to win or at least to improve yourself.  There's a life lesson to be learned.
Posted by Mad Minerva at 11:52 AM No comments: Links to this post

Email ThisBlogThis!Share to TwitterShare to FacebookShare to Pinterest
Labels: I'm sure this is going to turn out just awesome, Rants, Rio Olympics, sport

How to tell if your cooking sucks.

Posted by Mad Minerva at 9:00 AM No comments: Links to this post