Here's a shout-out to La Parisienne, who's currently marathoning Deep Space Nine, the second-best of the new Star Trek shows.  (The first and best is the Next Generation, natch.)  So here's a great little mashup of DS9 characters and moral alignment from the world of gaming: 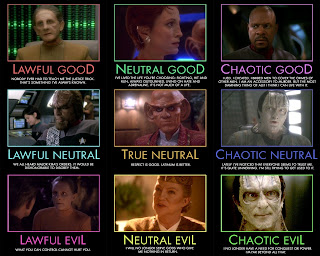 I've always thought I was Chaotic Good myself.  Anyway, below the fold I've listed some of my favorite DS9 episodes.  (Oh, and Sisko totally looks waaaaaaaaaaaay better bald with facial hair.)

In chronological order of air date:
Posted by Mad Minerva at 7:36 PM