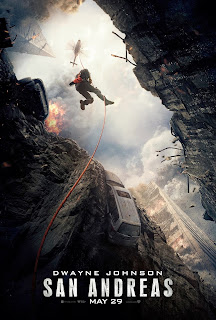 
I can sum up this blockbuster action disaster flick in just one phrase: The Rock vs. the Fault.  Dwayne Johnson and the San Andreas, that is!  Johnson's established himself as an action movie star of the first order long before this flick, and he'll be one long after it.  That's good, because San Andreas is pretty much a huge, noisy, bombastic CGI cartoon of geological mayhem and mass urban destruction.  (Weather forecast: Cloudy with a chance of storage ship containers.)  I'd be lying, though, if I said that I wasn't stupidly entertained for 2 hours, because I was, and that's due almost entirely to the Rock's own irrepressible personal charisma.  Is the movie preposterous in a dozen different ways?  Yes, it is.  Did I have fun anyway?  Yes, I did.

It's big dumb fun, all right: The plot is obvious, the dialogue completely predictable (there was one moment when I yelled out the answer to one character's question in unison with another character's reply), and the moviemakers' attempts at humanizing the characters pretty shallow, but who cares, right?  This ain't Casablanca, people.  It's a summer blockbuster popcorn genre movie jammed to the gills with special effects and entertaining casting.  It's a disaster flick about a monster earthquake starring the Rock.  That means we've got some genre-specific expectations:
One more thought: A friend of mine piped up as we left the theatre, "That was a lot of fun, but ... Wasn't the Rock's character kind of ... um ... selfish?  I mean, he's a fireman; he's a first responder for emergencies.  Shouldn't he be with the rest of the first responders trying to save as many people as possible?  He basically abandoned them all so he could go off and try to rescue his own kid.  Oh, and he stole a bunch of vehicles along the way too."  Clearly my buddy thinks too much to ever be a Hollywood screenwriter!

Mad Minerva gives San Andreas a grade of B.  Hey, as far as natural disaster flicks go, this one isn't half bad.  We're comparing it to other members of the genre.  Remember Armageddon? Deep Impact?  Twister? Volcano? The Core?  Come on, THE CORE.

San Andreas runs for 114 minutes and is rated PG-13 for action sequences, intense scenes of natural disaster, some strong language, and one f-bomb.