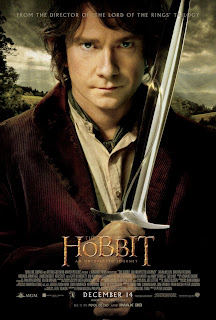 Put a ring on it.

Peter Jackson manages to avoid repeating George Lucas' grossest errors in prequel-formation as he takes us back to Middle Earth in an imperfect, overly long film that is still worth the price of admission for the simultaneously humorous and horrifying contest of riddles between Bilbo Baggins and Gollum.

Don't get me wrong - I love Middle Earth and have ranked the Lord of the Rings trilogy as one of the best film series ever made, but I have to say that The Hobbit: An Unexpected Journey is problematic.  Let's chat, shall we?

From the beginning I had been skeptical of Jackson's decision to turn a single lighthearted book, The Hobbit of 1937, into a full-blown trilogy.  Turning the Lord of the Rings into a film trilogy was a no-brainer of a decision since the source material consists of three books of epic scope, but The Hobbit has a different personality entirely. It's not about the titanic, existential battle of good and evil involving multiple locations, various subplots, and a vast number of characters; it's basically about a hobbit and a troupe of dwarves going off to find a dragon and its gold.  It's not an epic of the same scale (argue about whether it's epic at all, right?), and trying to make it so is a mistake. The idea of stretching this tale into three entire movies seemed to me to be inflating it to parameters that the story itself could not sustain.  Just how much padding could Jackson stuff into his product?  This hilarious Onion jibe hits home: "'The Hobbit' To Feature 53-Minute-Long Scene Of Bilbo Baggins Trying To Figure Out What To Pack." (Zing!)

Padding out the runtime also involves the inclusion of things that I won't mention here because they would be spoilers. I'll just say that purists might take issue.

As for the cast: Martin Freeman is a fine Bilbo, but his dwarven companions are basically one huge undifferentiated mass.  Accuse me of dwarf-racism if you want, but to me the lack of individual characterization ultimately made all the dwarves seem alike and interchangeable (aside from the leader Thorin, grimly played by Richard Armitage).  Besides, everybody's absolutely buried under a Mount Doom of prosthetics, makeup, and wardrobe; it's a wonder they can even move, much less attempt to act.  Anyway, the dwarves become almost a joke:


Finally, I have to say that one huge problem is technical difficulties - that is, the movie's new format of 48 frames per second is a new wrinkle on image technology, but at this point, it looks odd. (Here's even a little article explaining why, and I now expect Jackson to say to critics noting the visual issues, "Who are you going to believe, me or your lyin' eyes?")  There are moments when the images appear in such superduperhyper-definition that the movie doesn't even look like a movie anymore.  It looks like ... OK, it looks like HD TV or a video game.  The visual element becomes counter-productive: it was supposed to make you feel immersed in verisimilitude, but instead you feel more alienated than ever because when you see everything in such detail, you also see all the makeup, prosthetics, props, set design, and such.  The sheer artificiality of what you're seeing pops out of the screen in 3D and hits you over the head like a dwarven axe.  I saw the flick in IMAX 3D, and at times the effect was inescapable.


Still, it was a pleasure to see Sir Ian McKellen return as Gandalf, Andy Serkis is creepily brilliant as Gollum, and Martin Freeman proves himself as charming a Bilbo as you could wish ... though you do feel like grabbing him by the shoulders and yelling that under no circumstances should you blithely give your name and address to a total stranger whom you just met.  Why not just fork over your credit card numbers and log-in passwords while you're at it, Bilbo?


Mad Minerva gives this film a grade of B.


Rotten Tomatoes gives The Hobbit: An Unexpected Journey the Fresh rating of 65%.


The Hobbit: An Unexpected Journey runs 169 minutes and is rated PG-13 for fantasy violence and frightening images.

Did you see it in HFR Imax 3D?

The best we had in town was RealD 3D and that is not HFR 3D.

3D presents the opportunity for depth, not everything has to pop off the screen. Sadly, there were too many scenes where it looked like a 3D character on a 2D background.

The extra material isn't going to be "padding" but rather the part of the story only alluded to in the book. You might remember at one point Gandalf saying something like, "I've got some wizard stuff to do. I'll see you guys later."

The movies will cover the wizard business left out of the book. Will it be done well? I don't know but I hope there are less dog sleds pulled by rabbits.

This first Hobbit movie was almost 3 hours long. Extrapolating this to the remaining two movies gives us, what, 9 hours in total? LOTR was about 9 hours and rightfully so, but the Hobbit story? I still think it can't sustain that. The rabbit sled was pretty awful, and I'll say NO THANKS if that's what "more wizard stuff" entails.