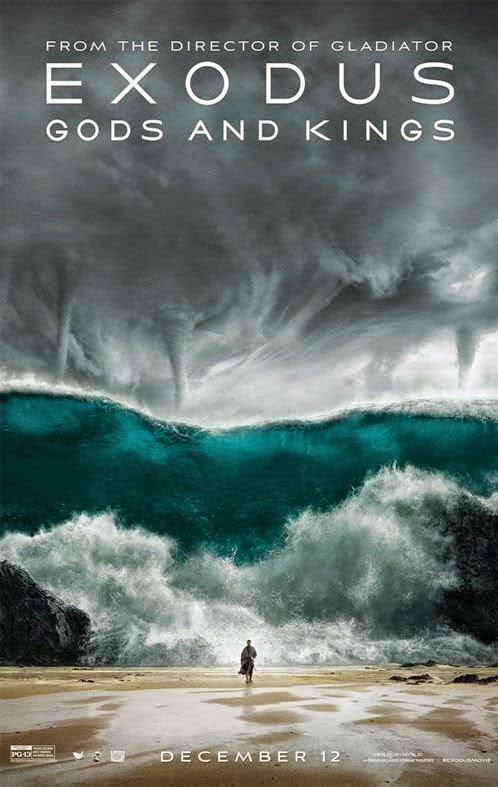 It should tell you something that after I saw Exodus: Gods and Kings on opening weekend, I went home and watched 1998's DreamWorks animated The Prince of Egypt on Netflix ... and had a much better time.  I would have watched Cecil B. DeMille's monumental 1956 production of The Ten Commandments with Charlton Heston as Moses and Yul Brynner as Ramses, but - alas - it wasn't streaming.  Then when I sat down to write a movie review, I seriously contemplated framing it all as a "I'm sorry, please take me back, I love you!" letter to Chuck Heston.

Come on, babe.  You know it's always been about you.

OK, OK, let's get to Exodus: Gods and Kings (and why in the world do we need that colon and its little subtitle?  Isn't Exodus enough?)   All cards on the table: I wanted to like this movie.  I wanted to like it a LOT.  There's no disappointment quite like dashed hope.  I almost entitled this review Exodus: All Washed Up.  In fact, it would probably take the entire Red Sea to wash all the guyliner off Bale and Edgerton ... though I suppose I must give some kind of grudging acknowledgment of an entire movie in which the men wear more makeup than the women.

Overall, this movie review is probably going to sound a lot like my Interstellar review: engaging visuals but problematic character development and plot.  Don't get me wrong: the panoramic shots of ancient Memphis (the Egyptian one, not the Elvis one) are gorgeous, battle scenes are full of chariots and banners, the famous Red Sea is suitably impressive.  The plagues play like Syfy Channel monster-of-the week horror monster schlock, and I'm not necessarily saying that this is a bad thing per se ... though it all started feeling excessive after a while, and the whole mess began with a scene on the Nile that was basically a crocodilian ripoff of Jaws.  Still, what does it say about your cinematic biblical plagues that I wouldn't have been surprised if director Ridley Scott added a plague of Sharknados or Mega Python?

I realize that this review is a mess.  I can't seem to focus, because there are so many targets.  For a biblical epic, Exodus in far too many spots seems terribly ... uninspired.  Let me just point out a few things:

The relationship between Moses and Ramses.  This should have been the engine for a great deal of character development, but I have to say that Exodus does a hit-or-miss job at best.  Look at these expressions.  It's as if Edgerton and Bale know.  This image is from the start of the movie.  There is absolutely zero chemistry between these two. Even after the two end up on opposing sides, I never got the feeling that they truly felt it.  At the moment when they meet after Moses has fully embraced his Hebrew heritage and returned to demand the liberation of his people, Ramses actually says the phrase "from an economic standpoint."  The scene suddenly sounded like a boring board meeting, not the emotionally fraught confrontation of two former brothers.

You want really good storytelling about these two figures and the emotional toll of their changing relationship?  Watch The Prince of Egypt.  I mean it.  Watch it right now.  No time?  Look at the character development already in full bloom as the Ramses and Moses kick off the movie with a hilarious, fraternal chariot race: 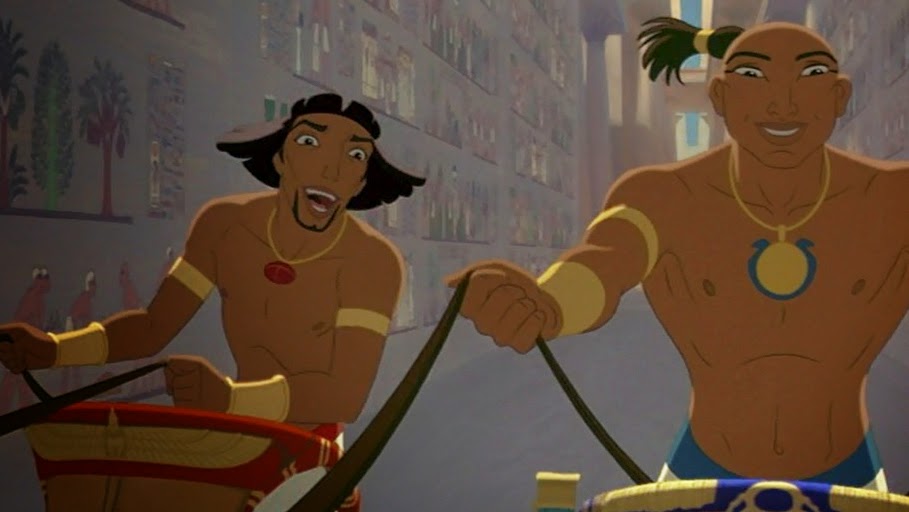 The affection between the two is clear.  By the time the two become opponents in the second half of the film, you feel the pain of that ruptured brotherhood even as they do.  Their duet during the plagues is, in this sense, brilliant.

Prefer to go old school?  Let's go back to Brynner and Heston, who portrayed the two men as rivals from the beginning who yet share a bond: 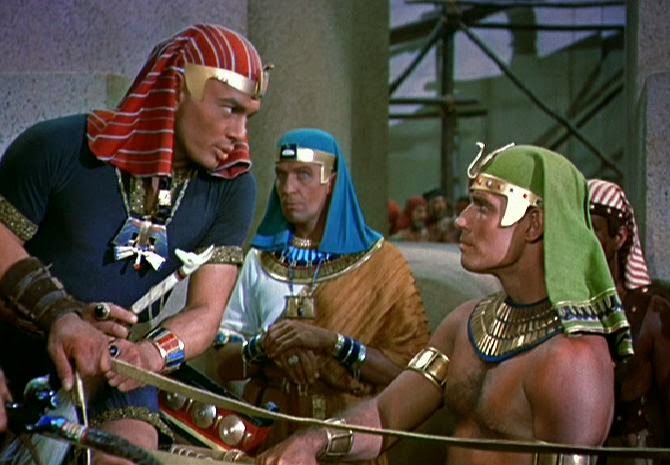 The energy of the relationship is evident even from one arbitrarily-chosen still.  These two command the screen with sheer presence.  Charlton Heston, man.  Nobody does it better.

Seriously, though, aside from the crucial Moses-Ramses conflict, all the relationships throughout Exodus seem superficial and desperately underwritten.  For example, just try comparing and contrasting the depictions of Sephorah/Tzipphorah/Zipporah/Zip-a-Dee-Doo-Dah in the three flicks.  Moses' wife in Exodus is reduced to a non-entity.  I'm also going to say that Exodus adds to its already egregious list of sins and shortcomings by criminally underusing Sigourney Weaver and Ben Kingsley.  A post-Breaking Bad Aaron Paul also barely registers, though in his role as Joshua I kept expecting him to say things like, "Yeah, bitch!  Plagues!"

All right, since I'm already on a roll ... I'm assuming that everybody knows the story, so I won't be spoiling it too much to say that I thought Ridley Scott completely dropped the ball on the Burning Bush scene.  I won't go into details, but let's just say that when the audience meets God and not only isn't awed at all but instead is actually annoyed, you have done it wrong.

Look, I told myself that my review was not going to gripe about the movie's deviations from the source biblical text.  Everybody with a brain understands that a film adaptation is a work of art that is free to to take creative liberties in the name of visual storytelling.  (If you really want the Exodus story, then let me suggest you read the source.  Yes, I link to the King James Version because it's so darn poetic.)  My problem isn't with departures from the text.  My problem is with the fact that none of the alterations made the story any more emotionally, viscerally compelling on screen.  Special effects fail to fulfill that purely human imperative.  In fact, the Red Sea parting scene reminded me too much of the mega-tidal wave from Interstellar, and both left me with the same empty feeling.

Mad Minerva gives Exodus: Gods and Kings a grade of B-.  Yeah, this is probably grade inflation, but I'm going to let it slide because the visuals are so pretty, the flick is so much better than the soggy Russell Crowe mess Noah (so bad I didn't even bother writing a full movie review ... Oh, let's give it a F right now), and because I was entertained in a snarky way by the plagues and the guyliner.  It's worth seeing once, but the problem at the emotional core of the film remains.  In fact, one character in the film inadvertently summed up the whole thing with a comment on another matter: "It's not even a good story."  At least the makeup's fab!

Exodus: Gods and Kings runs 150 minutes and is rated PG-13 for battle sequences and intense images.

RottenTomatoes gives the movie the rotten rating of 28%. 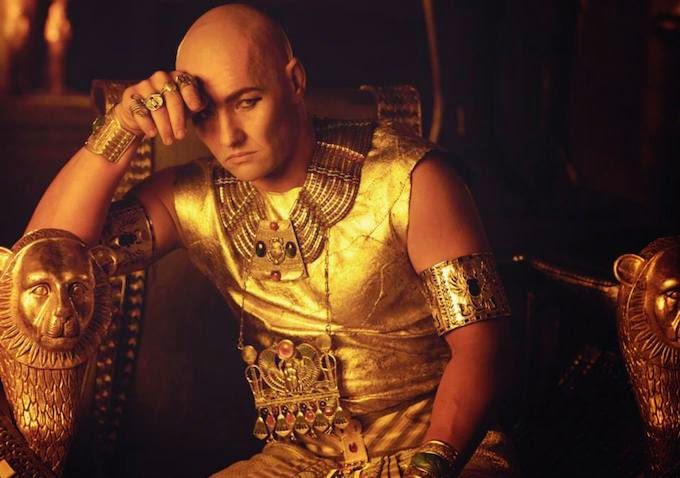 Sorry, man.
Oh, and Cleopatra called. She wants her makeup back.

Yep. Saw the movie last night. I agree with the total hit and miss affair this movie was. This review is pretty much on the nail.