Movie Review: "The Hobbit: The Battle of the Five Armies" 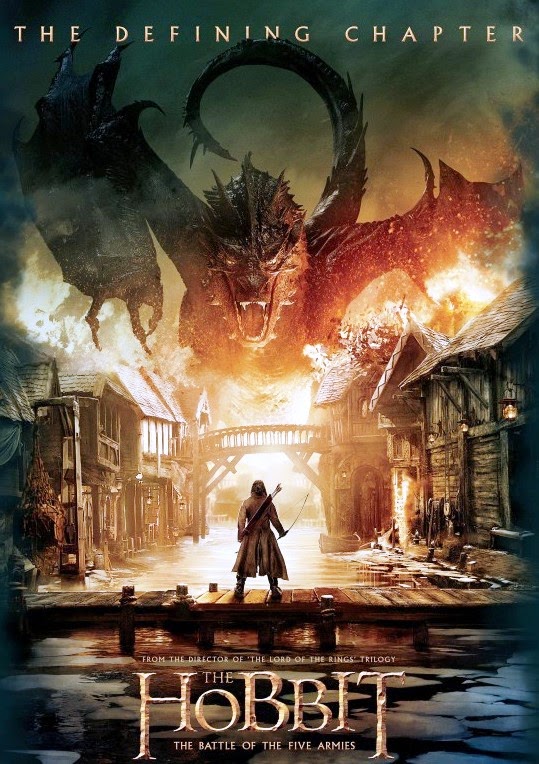 Thorin Oakenshield asks the other dwarves this question, and it might as well be director Peter Jackson asking his now-exhausted audience to finish his seemingly interminable Hobbit trilogy. By the time my friends and I went to the theatre on opening weekend, I was mentally prepared to slog through the final installment not because I was actually excited to see it, but because I wanted to finish it and get it over with already. I felt pretty much like I did when I went to go see the last Star Wars prequel. Thank goodness the Hobbit finale is better than that, though prequel fatigue set in with a vengeance, and it was not helped by the news that Jackson had included a battle sequence that lasts 45 minutes. There is one point in the movie when something ludicrous happens, prompting a character to burst out with mingled disbelief and annoyance, "Come ON!" and the audience can't help but agree wholeheartedly.

I've said it before, and I'll say it again: the Hobbit as a story cannot hold up under this overblown, bombastic, wannabe-epic, 3-part, 9-hour-long cinematic treatment. The misguided attempt to turn this one lighthearted children's book into something that it fundamentally isn't (*cough* Lord of the Rings! *cough*) is a serious lapse of judgment, and once Jackson commits this lapse, he compounds it by turning the Hobbit into his own flight of rampant fanfic imagination as he stuffs his movies full of characters and events that never appeared in the original Tolkien book. I know he's been doing this from the get go for this trilogy, but I've long since lost my patience.

I could spend this entire review griping about the endless egregious insertions, digressions, amplifications, and flat-out fabrications, but we would all be quickly bored. Suffice it to say that an entire slew of people have absolutely no business being in this movie, yet there they are. Cramming them in has another price: ostensible protagonist Bilbo Baggins (Martin Freeman) is reduced to a bit player in his own story. It's a waste of Freeman's considerable talents and waffling charm. No soggy love triangle among Kili, Tauriel, and Legolas (the latter two of whom shouldn't even be there in the first place) can justify marginalizing Bilbo. Yes, I know Tauriel and Legolas are partly there to capitalize on the prettiness of Evangeline Lilly and Orlando Bloom.  No, I don't care.

Meanwhile I'm writing this review while watching The Fellowship of the Ring with a sense of relief. Thank goodness the prequel is over; let's get to the GOOD story. But first, let's recap the previous two movies so we remember just where we are in the overall story, shall we?

It's Festivus today, so let's air some grievances! The dwarven fellowship is still pretty much an undifferentiated mass of makeup aside from Thorin (Richard Armitage) and Kili (Aidan Turner). It's a total waste of those actors.  James Nesbitt (Bofur) is just one example of someone whom we all know is capable of greater things than this.  Anyway, Thorin is obsessed with getting the Arkenstone jewel (gee, now where have I heard that before? some guy is consumed with getting his mitts on a thing that corrupts him with desire?) and soon exhibits "dragon sickness," which seems a fancy way to say he's pretty much gotten too big for his dwarven britches.

Gandalf (the long-suffering Ian McKellen) is still off on his horrible wizard business trips, and slovenly Brown Wizard Radagast (Sylvester McCoy) is still zipping around on that ridiculous bunny sled. Galadriel (Cate Blanchett), Saruman (Christopher Lee), and Elrond (Hugo Weaving) show up, confusingly, to fight the Ringwraiths or something.  Everyone keeps foreshadowing the rise of a dreadful unnamed power, the effect of which is absolutely nil because we all saw LOTR and we all know it's Sauron.

This time around, Smaug (voiced by Benedict Cumberbatch) gets very little screen time, and the hero of the hour is Bard the Bowman (Luke Evans), whose earnest attempt to inject some interest into the story is immediately undone by the presence of the annoying, unibrowed, and utterly unfunny Alfrid (Ryan Gage), Laketown's resident political slimeball.  Why should this cowardly bootlicker get more screen time than Smaug or (seemingly) Bilbo?  Get your priorities straight, Jackson!  Nobody cares about Alfrid!  If anything, I'm more interested in Elf king and winner of Middle-Earth's Most Fantastic Eyebrows Award Thranduil (Lee Pace), if only because he's so snootily bitchy and looks so fabulous swanning around on a gigantic elk thing.

Mad Minerva gives The Hobbit: The Battle of the Five Armies a grade of B.  Despite its considerable flaws, it's quite a technical achievement that employs every pixel in New Zealand, and it is the best of the trilogy. The mammoth battle scene turned out to be actually mostly entertaining, so perhaps we can all be forgiven for losing track of just which army is which. The flick does wrap up with a satisfying segue to The Fellowship of the Ring, so that's a mark in its favor.
The Hobbit: The Battle of the Five Armies runs 144 minutes and is rated PG-13 for fantasy violence and frightening images.

RottenTomatoes gives the movie the marginally Fresh rating of 60%.

The trailer is here:

Oh, I can't help adding this bit of satire.
Posted by Mad Minerva at 9:20 PM