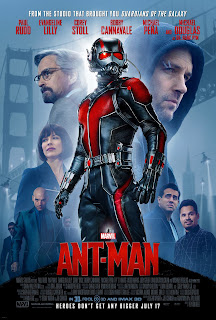 Charming, cheeky, and just a little unheroic, the always-charismatic Paul Rudd metamorphoses from ex-con Scott Lang into the titular character in Marvel's better offering of the summer (sorry, Avengers: Age of Ultron).  Bigger isn't always better, and Ant-Man recaptures a good bit of the zany, lighthearted fun that seemed so often lacking in its more overstuffed, ponderous cinematic sibling.  Ant-Man, by the way, takes place after the events of Age of Ultron, but - thank goodness - you really don't have to have seen it in order for Ant-Man to make sense; Rudd's minuscule alter ego's story can stand alone and not be completely overwhelmed with Marvel mythology and bogged down with Significance.  Lang/Ant-Man is like Hermia in A Midsummer Night's Dream: though he be but little, he is fierce!  And funny to boot.


At first glance Ant-Man doesn't seem like an obvious choice for a big summer blockbuster, but if last summer's equally improbable (and utterly luminous) Guardians of the Galaxy proved anything, it's that you should never underestimate the underdog.  Anyway, as I type this review, movie critics are absolutely savaging the new Fantastic Four flick, a movie starring a quartet of much better known (and indeed beloved) characters.  There's no sure thing in the world of superhero movies; your film version must rise (or fall) on its own merits as a film.

Let's talk about Ant-Man.  I want to make a particular note of the supporting cast, which is one of the strengths of the flick.  Michael Douglas is on board as Dr. Hank Pym, and I'm quite pleased with Marvel's penchant for managing to cast big names and big talents like Glenn Close and Robert freakin' Redford.  It's not just Douglas, though: there's an entire wing of good people, but I have to say that my favorite is Michael Peña (whom I had praised before), here stealing scene after scene as a very chatty ex-con friend of Scott Lang.

The short version of the plot is that Pym has figured out a way to shrink objects and people to tiny proportions - a technology with such potentially perilous consequences that he has hidden it away.  Of course this means that an unscrupulous corporate suit with delusions of power (Corey Stoll as Darren Cross, Pym's former protege) has that tech in his sights.  I can't give away much more, but I will say that there are some moments of clever playing with size changes that made me laugh out loud.  If there's something inherently silly about the idea that Lang is a centimeter tall while trying to accomplish his missions, there's something flat-out delightful in seeing how this plays out on screen as itty-bitty Lang must negotiate normal-sized objects that become gigantic obstacles.   You'll never look at ants or toy train sets in the same way again.

Be sure to look for the Stan Lee cameo (particularly fun in this flick) and to stay all the way through the credits.

Mad Minerva gives Ant-Man a grade of A- especially in comparison with Age of Ultron.

Ant-Man runs 117 minutes and is rated PG-13 for sci-fi action sequences and lots of bugs that insectophobes might not like.

Next up: A review of Mission Impossible: Rogue Nation that I saw (and loved) on opening weekend!  (I also owe you a review of American Sniper from way back when.  I haven't forgotten.)
Posted by Mad Minerva at 5:28 PM