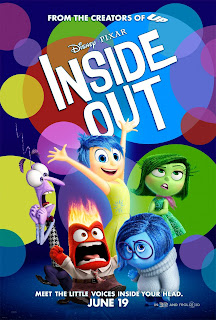 Hooked on a Feeling.

Somehow I missed this flick when it premiered back in June.  I don't remember seeing or hearing a ton of hype about Pixar's Inside Out, but I do recall thinking that it sounded like that goofy and ultimately failed 1990s sitcom Herman's Head.  Still, recently a sweet psychologist friend of mine wanted to see Inside Out because of its depiction of emotions as actual individual characters, so I headed off to the theater too ... and I'm so glad I did!  Inside Out is Pixar at its most scintillatingly substantive and engaging as it seamlessly combines a touchingly tender plot, outstanding visuals, and an audaciously inventive take on storytelling.  It's the best Pixar movie since 2010's Toy Story 3 made you weep into your popcorn, and it just might be the best complex, nuanced movie of the summer.

The premise is deceptively simple: inside the mind of an 11-year-old girl named Riley, the emotions Joy (voiced by the brilliantly cast Amy Poehler in full perky Leslie Knope mode), Fear (Bill Hader), Sadness (Phyllis Smith), Anger (Lewis Black), and Disgust (Mindy Kaling) all work together to operate her psychological being through a console of buttons and levers at Headquarters in her head.  They all care about Riley, and Joy is determined to make sure that Riley's memories are as happy as possible while she grows up and her personality develops.  Complications arise, though, when two unexpected things happen: (1) Riley's family packs up and moves to a new city, and (2) Joy and Sadness get accidentally swept out of Headquarters and into the depths of Riley's young psyche, leaving Fear, Anger, and Disgust to manage (badly) on their own.  Emotional imbalance and child psychology never been so riveting on screen.  Oh, and you'll never look at annoying earworms in the same way again!

Inside Out will soon be out of theaters, so run - don't walk! - to a screening as soon as you can.  Astoundingly creative, gorgeously animated, occasionally hilarious, often touching, and deftly engaging all your emotions throughout the hour and a half runtime, Inside Out is a spectacle both to behold in the moment and to ponder for many moments after the lights come back on.

By the way, I purposefully wrote a non-spoiler review (as usual), but if you would like a great review after you've seen the flick, check out MaryAnn Johanson's.

Mad Minerva gives Inside Out a grade of A+.  It is hands down the most narratively substantive, emotionally intelligent, and astonishingly executed film of the summer.

Inside Out runs 94 minutes and is rated PG for for mild thematic elements and some action, along with Pixar's high probability of pulling at your heartstrings and making you cry good tears.

Rotten Tomatoes gives Inside Out the breathtakingly Fresh rating of 98%.