The world seems to be spinning into unimaginable lunacy and madness, so let us take a break and seek a tiny bit of cinematic escapism, shall we?  Bond is back, and here is my long-delayed review. 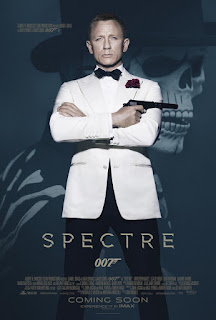 The 007 universe brings back an iconic villain, but he and even Bond himself find themselves playing second fiddle in the end to traditional supporting characters who emerge from the wings to command the screen.  Give us a movie with Q, M, and Moneypenny (Ben Whishaw, Ralph Fiennes, Naomie Harris ... and why not throw in Rory Kinnear's faithful Tanner too) on adventures right there beside Bond, and we might be onto a great twist to this venerable franchise.  As Spectre stands, though, it is a mixed bag of forgettable entertainment with tonal dissonances that threaten to push the movie into the world of camp at the most untoward moments.  Skyfall this movie isn't ... and more's the pity, because Skyfall set up the Bond universe with a promise of new greatness, but it's a promise that Spectre can't keep.

I'm not saying that I didn't like the movie.  I'm saying that I thought it could have been - and should have been - better than it is.  I suppose in the scale of Bond we should be glad that this is nowhere near as bad as Moonraker or Die Another Day or (since we're in the Age of Craig) Quantum of Solace, but for a movie that purports to give us none other than SPECTRE itself and that casts the indisputably great Christoph Waltz as the villain, Spectre fails to live up to its potential.  Missteps big and little keep dogging it and dragging down the already-bloated 2 hour 30 minute running time.  Let me try to explain.  Better get yourself a martini shaken, not stirred.  While you're at it, would you mind getting me one too, darling?


Maybe this is a directorial issue with Sam Mendes, but the opening sequence turned out to be for the most part more interesting than the movie itself.  This time Bond is in Mexico City on Día de los Muertos.  The cinematography is beautiful, the costuming just as good, the action engaging.  This! Is! Bond!  But right when you're enwrapped in that exotic fantasy world, something happens that not only bursts the bubble but turns it into a deflatingly silly sight gag that deserves a sad trombone sound.

Then there's the theme song and title sequence.  If I could expunge both permanently from my memory, I would.  That is exactly how bad they both are.  Admittedly it's hard to follow Adele, but Sam Smith's screechy tune is a mess all around, and it is so ill-fitting for SPECTRE as an idea that the song did the opposite of its intent and severely diminished the movie.  As for the title sequence, it was both creepy and absurd, and at moments it seemed as if it were turning into a kind of cephalopodic erotica that Cthulhu would enjoy.  Suddenly the previously cringe-inducing word "Octopussy" seems entirely reasonable by comparison.  (Did I actually write the words "cephalopodic erotica"?  Sweet Christmas.  That's ridiculous.)

As for the plot and its execution ... The goal of joining all previous Craig Bond films into a unified overarching whole is attempting far too much.  At the same time, the unfolding of Spectre does too little in other places.  Several characters in particular turn out to be grossly underused and underwritten cardboard cutouts.  Out of these, the gorgeous and apparently ageless Italian bombshell Monica Bellucci, playing a Roman mafioso's wife, has nowhere near the screen time or character development that she deserves.  What's the point of casting Bellucci if you're not going to do anything more with her than just shoot one disposable romp in the hay?   People had made much of the fact that she presented a Bond girl who was for once the same age as Bond himself, not some young ingenue - that she was a Bond woman in all the sensuality of maturity.  But in the film as we have it, if you blink, you'll miss her.  Nope, Bellucci soon vanishes to be replaced by pouty Léa Seydoux as Madeleine Swann, daughter of a former Bond foe (really?).

The less said about the personal connection between Bond and the bad guy the better, probably.  There is a certain sense of laziness in the exposition of the villain, the tropes, even the grandiose explosions.  Worse than the laziness, though, is the lack of sheer exuberant fun.  Yes, yes, I get that Craig's incarnation of Bond is supposed to be a darker, grittier one, but I honestly think we've spent enough time paddling around Bond's psyche in Skyfall.  Let's get on to the adventuring already ... but no!  Suddenly we're told that every awful thing that's ever happened to Bond has been engineered by SPECTRE and its sinister mastermind (this isn't a spoiler because it's obviously Blofeld, Persian cat and all), a fact that frankly demands too much credulity on the part of the (by now bored and exhausted) audience.

Furthermore, is SPECTRE really reduced to Bond's personal bogeyman?  In terms of being an international criminal organization bent on taking over the world, its vision seems rather ... limited.  Oh, there's a sort-of-parallel plot about intelligence gathering that could have been a really interesting exploration of the dangers of corruptible digital surveillance, but instead we get whatever SPECTRE is here, which seems more "board meeting" and less "terrifying international cabal."  The board meeting element is so strong that I fully expected someone to start an Excel presentation.  I wish to high heaven that the writers had taken M's subplot with the intelligence gathering and made it the real plot.  I wish they had the creativity and nerve to let M, Q, and Moneypenny go full-out rogue a la Mission: Impossible.

One more thing: at one point the name "Vesper Lynd" appeared, and I wanted to throw popcorn at the screen.  ENOUGH ALREADY OF VESPER LYND, OKAY?   Yes, Eva Green's turn as Vesper in Casino Royale was great, and in terms of narrative she really socked Bond in the gut and hurt him emotionally, which was also great.  Quantum of Solace became the franchise's first obvious, direct sequel, and Vesper's ghost hovered all over it.  But enough already.  Hammering the audience over the head with repeated reminders of Bond's bad romance 3 movies after the event doesn't make him more interesting and complicated.  It makes him less so because we start to see him as an obsessive unable to handle this one issue.  Maybe I'm just a cruel, cold-hearted monster about this, but come on.  This is Bond, and he didn't behave like this even after Teresa "Tracy" di Vicenzo in On Her Majesty's Secret Service.  We all suffered through the cinematic bludgeoning of the audience that was Quantum of Solace.  Sorry, Vesper.  You're probably my favorite Bond girl of the Craig era (assuming we don't count Moneypenny as a Bond girl, in which case Moneypenny crushes all competition to dust), but your story's done.  We need new stories.

The worst of Spectre, though, is the nagging, inescapable sense that Waltz's Blofeld is criminally shortchanged.  Of all things you underwrite this part?  How did you manage to short him on screen time?  It's inexplicable.  Waltz was born to play a Bond supervillain!  How'd you screw this up?

Mad Minerva gives Spectre a grade of B-.  Despite the movie's considerable flaws, I can't help but give it a nod for the beauty of the scenes shot on location in Rome and for the presence of Oscar magnet and Austrian national treasure Christoph Waltz, who is better than his on-screen character.

RottenTomatoes gives this flick the barely Fresh rating of 64%.

Spectre runs for 148 minutes and is rated PG-13 for violence, sexual situations, and some language - i.e., for being a James Bond movie.

Oh, what the hell.  Since Spectre wasn't all that and a bag of chips, here's a band having some fun with the legend of Bond:


By the way, that should be "I wish I were James Bond" since it's an English conditional.
Posted by Mad Minerva at 4:37 PM