Here's the trailer for the remake of 1959's Oscar-winning epic Ben-Hur, and I am all kinds of unexcited about this project, even if it somehow got Morgan Freeman to bring some dignitas by sheer dint of his voice:


Maybe the remake will surprise me and actually not be a disgraceful insult to the splendor and substance of the real Ben-Hur (i.e., Heston's, obviously), but I have my doubts.  Heston won the Best Actor Oscar for his turn as the complicated lead character, and I am pretty darn sure nobody's winning anything for the action-filled mess that is the remake if the trailer is any indication. 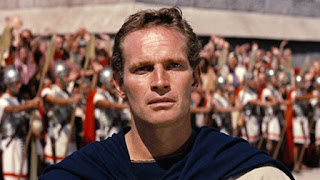 When I watch the new Ben-Hur and write a review, I might end up having to rehash my Exodus: Gods and Kings review where I said:


I seriously contemplated framing it all as a "I'm sorry, please take me back, I love you!" letter to Chuck Heston.

I should never have left Heston's Moses aside to watch Christian Bale's.  It was no contest, and the storytelling was garbage.  Seriously, how do you screw THAT up?  Well, in much the same way people are probably going to screw up the Ben-Hur narrative, I guess?  Come on, the story is supposed to be about the fractured ties between Ben-Hur and Messalla, and the all the trailer can do is have Messalla yell, "Are we having fun now, brother?" like a snippy teenager.  Is that really the best you can do?

Anyway, people tried remaking Ben-Hur as a TV mini-series back in 2010 (yes, this really did happen), and that project made no impact whatsoever.

Contemporary movies are getting to be so much sound-and-fury, CGI pixel insanity kinds of nonsense (with notable exceptions).  Maybe I should start doing reviews of more classic "old" movies to remind everyone, myself included, not to forget the great cinematic achievements of the past.  Sure, they were all made long, long before I was born, but I'm a history buff: we shouldn't become so engulfed in the present that we forget the things that went before and start thinking that the short-term, attention-deficit cult of Now is the only thing that matters. 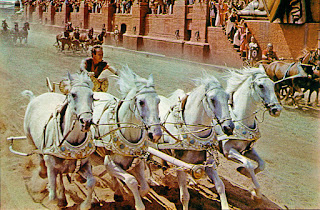 Longing for a hero on a white horse?  How about four?
Posted by Mad Minerva at 10:54 AM

Email ThisBlogThis!Share to TwitterShare to FacebookShare to Pinterest
Labels: ancient Rome, classic movies, I have a bad feeling about this, movie trailers, movies, remakes and reboots, video