I'm working on a full review, but I saw the movie yesterday afternoon (finally!), and here are some first impressions.

The thing is this year's "Iron Man," not to mention exactly the jolt of life that the Star Trek franchise needed.

I spent most of the film sitting there with a big silly grin plastered all over my face. The thrill is back. The fun is back. The MAGIC is back. In geekspeak, it's a nerdgasm! This flick races along at breakneck speed like a roller coaster, and it is a fantastic ride. Plus, there's no careful diplo-speak, hand-wringing moral lessons, conundrums that seem to tie people's hands; instead there's the fabulously liberating sense of people freed to ACT -- and act with unfettered vigor, act to take your destiny into your own hands. And, boy, is there a lot of action! (You know, much as I love Picard's erudition and all that, sometimes I just want to see a young, energetic, self-confident Kirk throw punches at bad guys -- and Chris Pine performs admirably.) There is a certain wild, unbridled joy in kicking butt without hesitation or apology, and this flick indulges that with gusto.

Even more remarkably, for once a movie lived up to the hype, hope, and expectation. This thing blows all the competition out of the water (Wolverine who?) and sets the bar sky-high for the rest of this summer's would-be blockbusters (OK, John Connor and Optimus Prime, you're all on notice). "Star Trek" has thrown down the gauntlet: THIS is how you reboot a franchise. THIS is how you make an origin film. (THIS is what the miserable Star Wars prequels should have been like, by the way. George Lucas, you just got schooled.)

So, in acknowledgment of all this, since credit must be given where credit is due to JJ Abrams, who helmed this project and more or less achieved Joss Whedon status with it:

And I do mean, ALL. The sheer awesomeness of "Star Trek" has wiped out every disappointment and misstep you've ever inflicted on me. They're all gone -- the total stupidity of the final season of "Alias," the unwatchable current state of time-warping nutcases on "Lost," the complete inability of "Fringe" to spark any enthusiasm, the casting of Keri Russell in "Mission Impossible 3"... All of it's gone as if it'd never happened. Magically, just like in the Trek flick, you've gone back in time and changed everything.

Live long and prosper, JJ. And enjoy the new blog tag dedicated to you.

PS
Don't think for a minute that I've relaxed my standards, though! Screw up "Trek" in the future, and I am setting my phaser on "TOTALLY VAPORIZE INTO SUB-ATOMIC PARTICLES."

On a related note:

The Cine-Sib has raved about the flick (his haiku review is here), and so has La Parisienne; both of them are working on full reviews, and I'll post them as soon as I get them.

The Sibling, by the way, had teased me before I went to the theater. He laughed and predicted I would come back with a nerd-crush on Kirk or Spock. Nope, that didn't happen. There was some nice eye candy, though: Hikaru Sulu, played by Korean-American John Cho (here's a nice interview with him in a Korean newspaper). 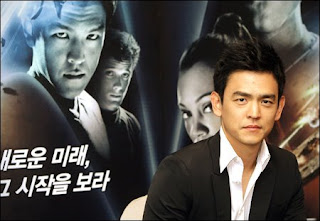 UPDATE 1: The Cine-Sib guest-blogs about the context of the Abrams Trek revolution.

Whedon status? JJ receives high praise, indeed. I hope he lives up to our expectations.

What did I tell you about Cho's Sulu? The man is an action hero in the making.

loved the film must watch for everyone