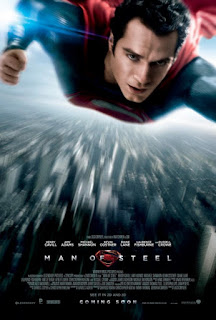 The somewhat improbable teamwork of Zack Snyder, Christopher Nolan, and David Goyer has produced one of the summer's most anticipated movies, and while Man of Steel has some problems that prevent it from achieving full greatness, it's still a watchably good film that both cleanses the world of Bryan Singer's 2006 disaster with Brandon Routh and hints at impressive future potential.  Think of this movie as Batman Begins for Superman.


No, really!  Consider this movie the Batman Begins of Superman, and suddenly your perspective changes.  I had been going to complain that in too many places the character development lapsed or that there were pacing issues (well, there are), but in the grand scheme of things - the full-scale rebooting of Superman in a massive effort - these quibbles seem more like annoyances and less like fundamental errors.

Look, Christopher Reeve's Superman in the iconic 1978 film has achieved pop culture divinity (as it should).  Any subsequent effort was going to having to deal with that and also be bold and creative enough to forge a new path and identity for itself.  Singer's 2006 flick tried ... and failed miserably.  I - along with plenty of other fans - pretty much hated everything about that movie, and it was almost Kryptonite for Superman on the big screen.  Now we have Man of Steel as the attempt to resurrect Krypton's last son for the movies.  It really isn't all that different in circumstance from 2005's Batman Begins resuscitating Batman after 1997's absolutely godawful Batman and Robin.  Given that Batman Begins itself has plenty of flaws but paved the way for later glory, I'm inclined to consider Man of Steel kindly as its counterpart.

I am a little bemused at the mixed reviews that have been rolling in.  It seems about as many critics don't like this movie as do like it.  Still, that itself should hint that the flick is worth a look, because anything that provokes both cheers and catcalls must have something interesting.

Some of the catcalls are deserved, though.  Let's start with Man of Steel's problems.  I stand by my initial complaint that character development suffers too many lapses.  Some of the characters are underwritten, sometimes badly, and the relationship between Lois Lane (Amy Adams) and Clark Kent seems thinly constructed.  I also still think that the flick has pacing problems; it bogs down in spots, and a runtime of 143 minutes ends up being unwieldy ... which brings me to a related gripe.  The last act descends into Michael Bay-esque extended, screeching, city-wrecking mass mayhem, and I don't mean that in a good way.  Making the smashup drag on for what feels like hours makes the problem worse.  The narrative gets lost in the noisy mess; the characters get lost.  Related gripe: I HATE SHAKY CAM!  I can't really discuss several major complaints without giving away spoilers, so I'll just have to let them go.  Oh, and do keep a lookout for a visual reference to LexCorp during the pandemonium.

What Man of Steel gets wrong, though, is (to me, anyway) readily counterbalanced and easily outweighed by what it gets right.  Fundamentally, it takes Superman seriously.  It takes storytelling seriously (well, except for the aforementioned urban destruct-o-rama).  The casting is full of familiar faces and inspired choices. The gifted Diane Lane, for instance, somehow manages to give her underwritten Martha Kent character a sense of real substance, and Kevin Costner cuts a warmly paternal figure indeed as Jonathan Kent.  Russell Crowe as Jor-El is all you think Jor-El should be.

I could go on and on, but I'll just say this: the ever-intense Michael Shannon brings to life a villain of more conviction than camp, and Henry Cavill is most certainly not just another pretty face  - he manages to embody and convey Clark's internal conflicts, loneliness, emotional vulnerability, and nevertheless unfailing morality so well that at times you actually forget about how beautiful that face is.

The movie has a solid core; it raises, even if it does not always satisfactorily answer, questions about identity, society, choices, coercion, power, responsibility, and how to live and relate with others (it isn't for nothing that we see teenaged Clark reading a copy of Plato ... and the fact that he does so right before he is accosted by bullies underscores that point).  The film has the intimations of a soul where it matters most.  It has quiet moments of reflection; at its best, it has a sense of spare grandeur as it thinks about Krypton and Earth, fathers and sons, the thirst for conquest and the desire to defend one's home (adopted though it is), and - for everybody in the film (and I do mean everybody) - confronting the unknown and the unexpected and grappling with the consequences.  In this vein, there was far more drama in a moment's quiet depiction of Clark in a church pondering what to do than in the entire sequence of ear-splitting, Metropolis-wrecking CGI havoc.

Overall, I think we can consider Man of Steel (warts and all) a good start, a promising prelude.  I'm looking forward to the next chapter.  (Oh, and I love the new suit.)

MM gives Man of Steel a grade of B+.

Rotten Tomatoes gives the flick the Rotten rating of 57%.