It's gotten to the point that I can no longer find polite words necessary to discuss the Syria fiasco, which seems to get more insane by the second.  So I resort to images.

Basically what the Obama Administration has created: 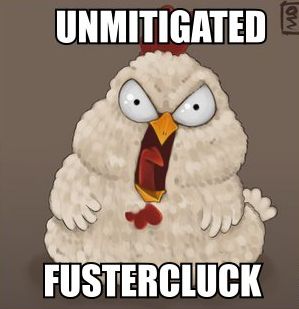 How the Obama Administration thinks it's doing:

How Assad and Putin think they're doing:

How people who care about actual foreign policy and national security are feeling:

How the media will try to present this to the public as some kind of Obama victory: 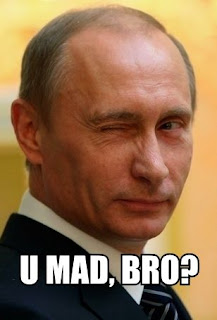 A video bonus, since someone has now called this "Monty Python's Flying Damascus."
Look, at this point you either laugh or you cry.

From the Fiscal Times article you posted a little while back:

These critics are not coming from conservative think thanks. They’re coming from former Obama administration officials.

For instance, Vali Nasr, who served as senior adviser to Richard Holbrooke when he was ambassador to Pakistan and Afghanistan, said this of Obama’s Afghan policies: “Their primary concern was how any action in Afghanistan or the Middle East would play on the nightly news, or which talking point it would give the Republicans. The Obama administration’s reputation for competence on foreign policy has less to do with its accomplishments in Afghanistan or the Middle East than with how U.S. actions in that region have been reshaped to accommodate partisan political concerns.”

Anne-Marie Slaughter, director of policy planning at the State Department from 2009 to 2011, said this about Obama's Syria policy: "Obama must realize the tremendous damage he will do to the United States and to his legacy if he fails to act. He should understand the deep and lasting damage done when the gap between words and deeds becomes too great to ignore, when those who wield power are exposed as not saying what they mean or meaning what they say."

And Rosa Brookes, a former senior adviser at the Pentagon, attacked Obama for his failure to outline a broad, sweeping foreign policy strategy. "The Obama administration initially waffled over the Arab Spring, unable to decide whether and when to support the status quo and when to support the protesters. The United States used military force to help oust Libya’s Muammar al-Qaddafi, but insisted at first that this wasn’t the purpose of the airstrikes — and without any clear rationale being articulated, the use of force in seemingly parallel situations seems to have been ruled out."

All three no longer work for the president. But all of their criticisms share one central theme – Obama does not have the personnel in place to outline and execute a broad international strategy. At the heart of this problem is a disconnect between the State Department and the White House’s national security team.
- See more at: http://www.thefiscaltimes.com/Articles/2013/07/11/Why-Obamas-Foreign-Policy-Process-is-Broken#page1

Today I'm hearing friends who are Obama fans start talking about how "something gone horribly wrong" with this. You don't say!

I suggest this exercise with you friends: Collect all the statements that Obama officials have made about the Syria problem that applied to the Iraq problem (eg, intel not legal standard, can't trust dictator, dicator compliance only due to credible military threat, urgent action needed, greater dangers invited if WMD concern not enforced ASAP, etc), yet Democrats scorned when stated by Bush officials.

Were they lying then or lying now? (Or both?)

If you do this, I'd enjoy reading your report.