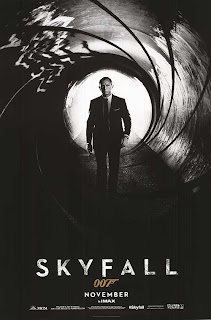 Resurrection.
Skyfall will make you forget the disappointment of Quantum of Solace (2008) as it fulfills the thrilling potential that Casino Royale (2006) presented of a new kind of Bond, and Daniel Craig blows away any lingering doubts that he is the best Bond since the iconic Sean Connery.  Moreover, Skyfall - a movie that was almost never made as critics wondered if the Bond genre had gone extinct - is a triumph that, despite some flaws, resurrects Bond in glory as the box office celebrated.  This is Bond wrapped in elegiac themes and gorgeous visual artistry, Bond a galaxy away from the self-parodic wisecracks of the past, Bond that plumbs the depths and doubts of being Bond.  It is also, as the Cine-Sib said, "a reboot without being a reboot," and the result is riveting. The full review is after the jump, but if you're in a hurry and can't engage right now, at least take a look at the spectacular music video of Grammy-winning Adele (!) singing the Skyfall theme: