In choosing a title for this post, I'm actually not being a partisan hack (this time, anyway), because both the movies I'm reviewing do explicitly state that the politicians in the plot are all Dems.  In fact, each one comes from writing (one a play, the other a book) that arose from their authors' engagement with actual political campaigns (respectively, Howard Dean's in 2004 (Yeeeaaarrrggghhh!) and Bill Clinton's in 1992).

Now I know I've moaned about how sick I am of politics (and I am), but there is a certain perverse amusement in watching these films during a hotly contested presidential election cycle full of skulduggery since both of them are indeed set in such cycles.  Art imitates life and all that, right?  Besides, Ides of March has not one but two bona fide Hollywood heartthrobs in the cast; in fact, as they swan around in smart suits and ties, they're so very pretty you almost forget that they're supposed to be reprehensibly slimy politicians. Well, almost.  So!  let's get to watching and reviewing, shall we?  The grand organizing principle for both?  The loss of innocence and the corruption of youthful, hopeful idealism.  (If you want something more comedic, try The Campaign (2012) with Will Farrell and Zach Galifianakis.) 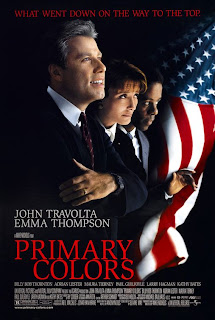 Ah, yes, shades of Bubba - Southern, schmoozy, philandering, oozing an unctuous charm, and constantly trying to mollify a foul-mouthed, tempestuous harridan of a wife.  John Travolta plays "Governor Jack Stanton" and Emma Thompson his wife Susan, and it's not long before they've dragged you into a world of sordid campaigning.  Look for nice turns by Adrian Lester as the idealistic Henry Burton and Kathy Bates as veteran political operative Libby Holden, whose combination of cynicism and morality is one of the more interesting aspects of the story.

Mad Minerva gives this film a grade of B.

Primary Colors runs 143 minutes and is rated R for pervasive language and some sexuality. 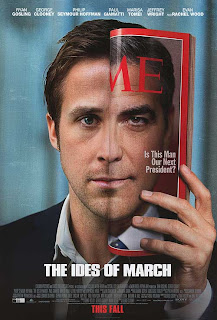 With a title like The Ides of March, it should be no surprise that the ultimate theme of this film is betrayal - not so much of individual people, though that happens and is disturbingly easy, but of something even more fundamental: honor and principle.  You end up betraying individuals only after you've already betrayed your own honor and principle, after all.

The storyline runs this: the presidency is at stake, and in a plot ripped from the headlines, it all comes down to the state of Ohio.  George Clooney is a rock star of a candidate, Governor Mike Morris, and Stephen Meyers (Ryan Gosling) and Paul Zara (Philip Seymour Hoffman) are on his staff as press secretary and campaign manager respectively.  The supporting cast is notable too for some good casting: Marisa Tomei as annoyingly relentless reporter Ida Horowicz, Paul Giamatti as the wily campaign manager for Morris's rival, and Evan Rachel Wood as a pretty intern whose father happens to be a party bigwig.  Put them all together, add lacings of ambition, corruption, and skulduggery, and you know you're going to get trouble.  One can only hope that trouble equals drama, and for enough of the flick, it does. 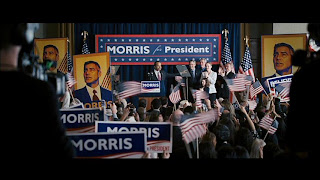 The movie is about Morris and his campaign, but it's more about Gosling's Meyers and his journey as that campaign unrolls in Ohio.  I don't have to tell you that too soon things spin out of control even for a young hotshot spin doctor like Meyers.

The flick has some issues with pacing and a few gaps in logic, but what was the most interesting to me (well, aside from the eye candy that is Gosling and Clooney) is the narrative that the charismatic left-wing politician promising a brave new world turns out to be (surprise! spoiler!) just as corrupt and venal as any other politician - his campaign of messianic transcendence is a cynical sham.  I don't think it even matters that Clooney himself is a huge Obama booster and has done high-profile fundraisers for him.  More important is the acknowledgment at all that politics (even in the Democratic Party) is a dirty business and that your political savior is not the man you (mis)took him for.  For a certain kind of Democrat, this is a shattering epiphany.  For everybody else, it's a statement of the obvious, but hey!  Baby steps, right? 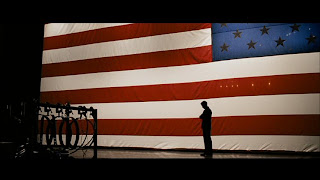 The moviemakers, though, seem to think this is really some kind of revelation.  I wasn't impressed, but as I said earlier, it's about personal expectation and one's own willing credulity. Disillusionment is often the sad but predictable end of self-delusion. I mean, come on, what kind of hopelessly pie-eyed naïf, what kind of emotional, gullible sap would actually believe all that glittering campaign claptrap slung about by a politician with a sharp suit, a bright smile, and media-inflated charisma?  You'd have to be - Oh, wait.  Well, Meyers does at one point even admit that he drank the Kool-Aid and that "it was delicious."

Anyway, I'm a libertarian/center-right kind of girl who naturally distrusts politicians and big-promising government, so I say, give them all as little power as possible.  This flick's depiction of one man's idealism turning into ashes succeeds because the acting is quite good (it's Gosling after all, who is indeed more than just a pretty gorgeous face), but as a general theme, it basically reaffirms my personal conviction that you should treat all politicians with a good dose of wary skepticism.  Don't drink the Kool-Aid, and for goodness sake, don't think any politician is going to be some kind of secular messiah.  He's a public servant, not a god-king.  You're his employer, not his acolyte.  The sooner you figure that out, the better off you'll be.  The better off we'll all be, actually.  Rant over. 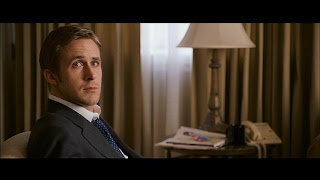 No more Kool-Aid for you!

Oh, and let me point out the most harrowing scenes in the movie are completely wordless.  I don't want to spoil them with detail here, but you'll have no problem recognizing them.  The most distressing of all, though, is the silent moment when you look into a pair of blue eyes and see beyond them to the soul freezing as the last vestige of warm humanity disappears.  It is a great moment in film.

One more thing: I'll just quote this other movie critic who said: "from the film's vantage point on the ideological rim, moderate Democrats are Machiavellian devils, and Republicans—I may be mistaken, but I don't believe a single one appears onscreen throughout the entire course of the film—are an inconceivable evil looming on a distant horizon, like the White Walkers in Game of Thrones."

I wasn't at all surprised, even if that critic was annoyed by the movie's "one-dimensional politics."  Anyway, nobody who isn't a Democrat appears in the plot, and there's not a hint at all that fully half the country identifies with another party entirely (be it Republican, Libertarian, Green, or something else).  This flick can't conceive of a political landscape that isn't painted in varying shades of blue, and that betrays its own shallow, even childish approach to politics.

Come on, Morris here is campaigning to win the Ohio Democratic primary, and the movie states that if he clinches the Dem nomination, he'll pretty much automatically become President.  Apparently the fact that he has to engage a GOP candidate doesn't even figure into the universe of the movie; any Republican automatically doesn't stand a chance.  This is silly on the face of it and dangerously so if you stop to think about this approach to politics.  So take this flick not as a truly serious take on politics but as a kind of unwitting satire or cautionary tale, and you may well be entertained.

Mad Minerva gives this film a grade of B.

Rotten Tomatoes gives The Ides of March the Fresh rating of 85%.

The Ides of March runs 101 minutes and is rated R for plenty of language and some sexuality and some states of undress.
Posted by Mad Minerva at 3:20 PM