Annie Get Your Gun: Girls and Firearms

Here is an interesting take.

OK, during the summer, I found myself at a dinner party with a bunch of nerds. The hostess, much older than I am, had a house full of nice antiques, and she was pleased to show them off. Finally, she brought out a prized possession, a 1906 Winchester rifle. Then something funny happened: all the leftist boys cringed and refused to go near it. Meanwhile, all the GIRLS went straight for it, regardless of political leaning. And I have to say, it was a beautiful rifle. Besides, it was fun to have a Winchester, the gun that won the West, as the saying goes!

Maybe there really is something to be said for girls and firearms. Besides, in a bad situation, a firearm isn't just a Constitutionally protected right: it's an equalizer and it could save your life and the lives of others. For the record, I don't think firearms are "yucky." I kind of think they're ... cool. Or as La Parisienne might say, "Nothing turns a woman on more than when something goes BOOM." Heehee!

And, since I referred to the musical in the title, I simply must give you more of it: 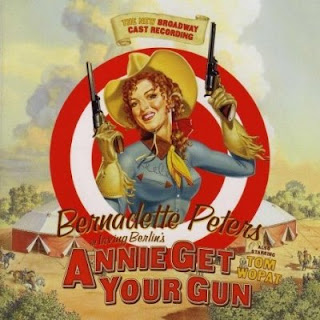 Coincidentally, re your observation about the "leftist boys" and the rifle, I recently posted this as yet undeveloped thought about the 2nd Amendment:

I'm thinking about the Second Amendment. On the ground level, it seems downright dangerous to allow the "right to bear arms" when crime and anti-social behaviors are facts of life, moreso in the cities where millions of strangers co-exist uncomfortably in close proximity. In other Western liberal societies, gun control is a non-issue: private ownership of firearms is not allowed. But our American founding fathers codified the right to bear arms as a means for the American people to resist external threats and the individual citizen to protect against a potentially tyrannical government. Within those classic opposing arguments, I tend to fall on the side of gun control, i.e., there's more to fear from uncontrolled guns on the streets than from government oppression or an invading foreign army. Recently, though, I've been thinking that the Second Amendment serves an important cultural function: a placeholder for the preservation of violence as an essential component of what men need to be. We men are the natural providers, competitors, enforcers, and defenders of home, family, and community, and within the context of our social duties, we should each value and understand how and why to use violence. My model for this aspect of manhood is soldiers - one of the principal manifestations of manly social responsibility - who are taught simultaneously to master violence and control it. I fear abolishing the Second Amendment would have the destructive effect of removing violence from the culture of American men. I want to think more about this.

Very good point. I'd add too that some of the same ideas apply to the ladies too in terms of self defense issues -- i.e., we can't always leave our defense "to the boys." Social responsibility and the proper place/use of force should be essential for both guys and girls.

The gun control issue brings up a corollary too: law-abiding citizens will adhere to the law, but criminals don't and won't, either in terms of gun control aspects or any other aspect. We're back to considerations of responsible self-defense and whether a blanket prohibition of firearms ultimately means the greater chance of law-abiding citizens being unable to defend themselves if necessary.

Eric, I disagree with your first view and agree with your second. While the Constitution links the right to bear arms to the militia, I believe that an armed citizenry is also one of the best defenses against rampant violent crime. Note that our domestic massacres happen in gun-free zones. As they say, "When seconds count, the police are only minutes away." But your psychological reasoning is good, I think.