History Remembered: France to Honor the Bagpiper of D-Day

You know, so often on this blog I'm railing about the ignorance of history, so I'm delighted in this post to note that someone remembers something significant. From Brits at Their Best comes this excellent link. News blurb:

Second World War veteran who played the bagpipes on the Normandy beach during the D-Day landings 65 years ago is to be honoured by French officials for his role in liberating them from Nazi Germany.

The picture of the 21-year-old commando became one of the enduring images of the landings which paved the way to Hitler's defeat in the Second World War.

Now he is to be immortalised in a life-sized statue by the people of Colleville Montgomery, which he helped to liberate in 1944.

That is just all kinds of awesome. Do go to the Brits at Their Best post on the subject, as it links to a clip from the film "The Longest Day" which has a depiction of this famous incident. If your eyes are sharp, you may see a little bonus -- a certain now-famous actor who is playing only a tiny part in that film.

I'll leave you, though, with this archival photo: 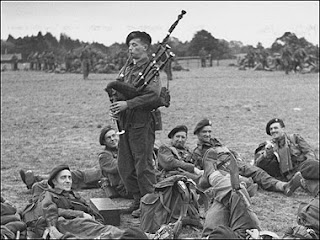