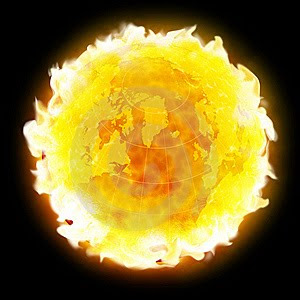 This is a nicely reasonable observation on the potentially enormous scientific scandal regarding the hacked email accounts of global warming enthusiasts. Do read. It's also got links to the news story as it's being covered by everyone from NPR to the BBC. Inevitably, someone's already called it "Climategate" and "Global WarmingGate."

The tone of the emails is very indicative, because people in emails tend to speak their minds and not sugar-coat or whitewash or wrap everything in careful diplo-speak. (So out of all this is a life lesson and a piece of advice, dear reader: in email or in any form of written communication done in a work/study/research environment, don't write anything you don't want to be publicly read. There. That's your Public Service Announcement for the day.)

Anyhoo, this whole situation reminds me of one name I've heard given to enviro-fanatics. The word is "watermelon" -- green on the outside, but red on the inside. As in Commie, Commie agitprop, propaganda, crush-the-dissent shade of RED.

Also for the record: the sciences are NOT immune from scandal and skulduggery, as any nerd can tell you. Heck, academia and research are shot through with that sort of thing.