Last week I did a big fat fangirly post about the current series of "Doctor Who." I said it was good but that it just wasn't really captivating me the way I wanted it to. I don't want to just "like" it (which I do). I want to LOVE it. I want to ADORE it.

And then, wonder of wonders, with the most recent two episodes, the show took a huge leap in that direction. Last night's episode, "The Lodger," basically did it, but it had gotten a huge assist from the 10th episode last week, "Vincent and the Doctor." Yes, Vincent. As in Van Gogh.

So what great stuff did that episode get right? Well, plenty, actually. 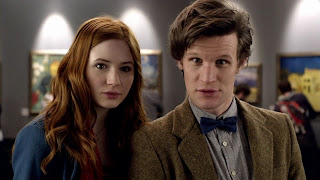 The episode opens with the Doctor being extra nice to Amy (after the horrible loss of Rory, which she can't even remember). And in his attempt to -- somehow -- be good to her (as well as to himself too, for the guilt must be dreadful), he takes her to all sorts of places, including a museum. A MUSEUM! A man after my own heart!

Then it gets even better. Whom do we run into in the gallery but the art expert and guide, who is played by none other than the delightful Bill Nighy! Bonus: he's wearing a bowtie. Double bonus that made me smile: He and the Doctor share a charming moment admiring each other's bowties. It was a tiny moment, but it was wonderful, and it was the sort of touch that elevates an episode from merely "good" to "great" or even in some cases, "awesome." 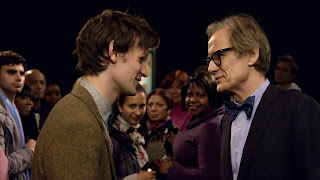 As it turns out, one of the Van Gogh paintings in the gallery contains the image of an alien monster, so Eleven and Amy race to the TARDIS and to 19th-century Provence to find Vincent and the alien threat. That's the plot. What follows now in this post is not about that, really, but about the fantastic little details that enrich it. The episode turns out to be a massive love letter to Vincent Van Gogh and his art. Now, to be perfectly honest, I'm not a huge Van Gogh fan, even though I know his art and I do appreciate it. (Well, OK, my favorite thing of his is "Starry Night.") But as it turns out, you don't have to be a Van Gogh fanboy/girl in order to appreciate the loving attention to detail and dedication to him that went into this episode. I was utterly charmed.

Take a look at this cafe where the Doctor and Amy go to look for the artist. It should look familiar if you recall your art history: 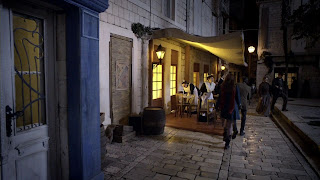 Oh, it gets better. Once we're there, we run into a certain troubled (and troublesome) artist who's attempting to pay his bill with a painting. And not just any painting. 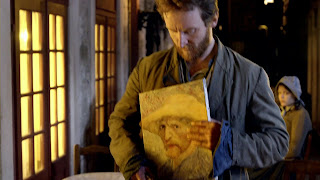 What a great touch that in our first encounter with Vincent (fantastically embodied by Scotsman Tony Curran), when we see him for the first time, he's carrying that painting! Later on, Curran will even wear that same straw hat.

In his little house, we see something else hanging on the wall as the Doctor and Amy come to call, while Van Gogh apologizes for the "clutter." 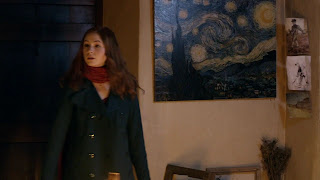 Oh, yes, it is! There's "Starry Night"! In fact, the entire house is evocative, and if you have even a passing acquaintance with Van Gogh's body of work, you might be amused to see what his room looks like: 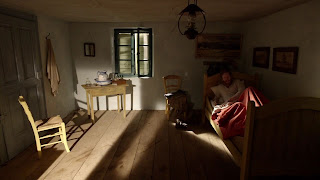 In this episode, we don't spend a lot of time gallivanting around strange alien landscapes. We're on Earth, but in a lovely approach, the show gives us some gorgeous visual setpieces. This episode is largely a confection for the eyes in all sorts of ways. Just look at this scene, in which Amy attempts to inspire Van Gogh to paint sunflowers. It's absolutely beautiful. And Amy's expression is just so much fun. 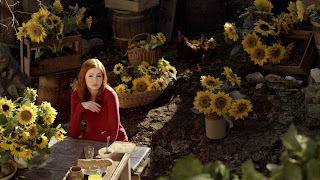 Then at episode's end, we see this when Amy and the Doctor return to the museum. Click to enlarge to see the lettering: 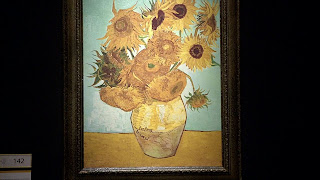 Visuals infuse this episode, and I'll end with two more great little examples. Take a look at what happens to the TARDIS when it's left in an alley for a few days. Yes, the locals use it as a billboard for pasting up announcements and advertisements! 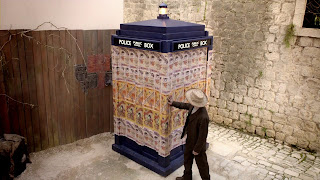 Then there's the Doctor's new gizmo, a device to show you what is really there (thus enabling him to see the invisible alien that is prowling the town). 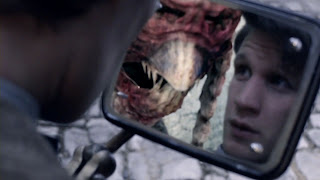 Sorry, I can't help myself:
"Monsters in the mirror may be closer than they appear"!

I would be remiss, though, if I didn't mention the themes of emotion and character that run through the episode: Amy, Vincent, the Doctor ... especially, at the end, and in the final analysis, the Doctor. And there is always that poignant something about the fragility of life and art and seeing the world around you in all its horror and wonder. And how much you can affect events too.

Next time: How episode 11 (how fitting a number) finally won me over. By apparently pulling out all the stops ever.

Screencap credit to Sonic Biro. Also, you can catch the episode (and all of the current season's episodes) here.
Posted by Mad Minerva at 11:33 AM