Episode 10, "Vincent and the Doctor" paved the way, but it was really this 11th episode, "The Lodger" that got me.

It was in many ways the show at its most charming and most fun. It was a celebration of the ordinary and of the pleasures and value of "an ordinary life." It was a story of how the Doctor can make a difference in the particular lives of ordinary people and that this is just as legitimate and worthy a cause as abstractly saving the planet/galaxy/universe. It was, at its heart, a story about people (Time Lords are people too, right?), people living their everyday lives. After all, the whole point to saving the universe/galaxy/planet is so ordinary people can live their lives, right? (Ignore Peter Singer on this one. Trust me.) Besides, you don't have to do something massively spectacular in order to make a difference or a good story (take note, Russell T. Davies, who sometimes forgot this).

"The Lodger" was also a Time Lord version of "The Odd Couple," and there is something simply, inherently appealing about the idea of the Doctor masquerading as a human and having a flatmate (Craig, beautifully and winningly played by James Corden). Danger aside (there's a creepy room upstairs that apparently eats people), the entire setup is geared for laughs as poor Craig finds his new flatmate rather ... odd and as the Doctor flails about trying to fit in. 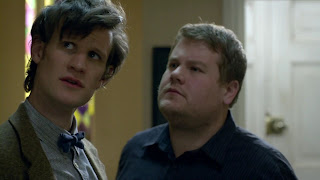 Then, because the show is apparently out to get me, it threw in all sorts of details and developments that were basically guaranteed to push my buttons. Take a look at a few examples:

1. Craig's refrigerator. Do you notice a clever little detail? 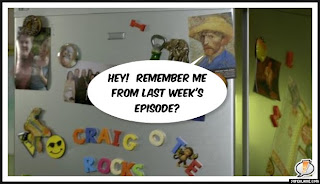 Bonus: the magnetic letters spelling "Craig Rocks." Besides, I love the messy fridge door. It's so ... realistic. My fridge door is a mess of magnets and pictures and postcards and papers too.


2. Technophiliac fiddling. Just look at this loopy machine that the Doctor jury-rigged in his room! He MacGyvered it out of junk and spare parts. And that's pretty awesome. 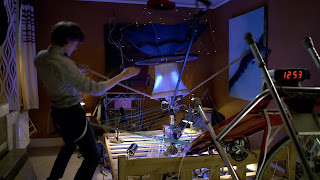 3. The sonic toothbrush ... I mean, screwdriver.

I'm back to obsessing happily over attention to detail. The Doctor's in the shower and he reaches blindly for ... Hey, look! 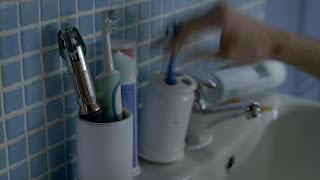 What's even better is that he rushes out of the bath in an attempt to sonic a perceived threat ... 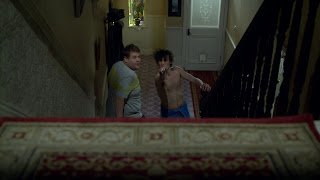 ... but, much to Craig's amusement (just look at Corden's expression!), the Doctor's actually grabbed the electric toothbrush instead. I laughed out loud, and I'll never look at my Sonicare toothbrush in quite the same way again. The entire little interlude was a great shout-out to ordinary objects in everyday life (and how they can slam up against the Doctor). 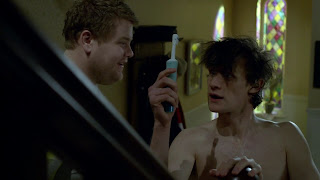 You're the DOCTOR, not the DENTIST.

4. Cooking. You know I love cooking. This darn episode! Must it appeal to the cooking fan in me too? Apparently, YES. The Doctor makes an omelet for Craig and mentions along the way that he learned how to cook in Paris in the 19th century. Did he go to the Cordon Bleu? Did he learn from Escoffier? We don't know. But what a thought! 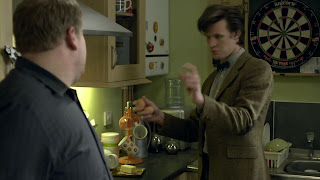 5. Soccer. I mean, FOOTBALL. Oh, and right during the World Cup, so you know this is no accident! Craig recruits the Doctor for his pub league team, and we get a whole wagonload of goodies out of it. For one thing, in terms of sporting tie-ins, this works SO MUCH BETTER than Season 2's "Fear Her" and its horrible London Olympics plot device.

Anyway, the Doctor changes into his kit, and right from the start it made me smile. He's put the jersey on backwards at first, yes, but notice the number on it. Also: when was the last time we saw a Doctor in shorts? Never, that's when. Nine and Ten never did (and, I have to say, Ciao Bello opined with crushing candor that nobody should ever have to see Tennant in shorts, and even lovely California Dreamer couldn't help poking fun at his legs after they saw this "Doctor Who Confidential" segment, *giggle*). But somehow shorts seem to dovetail perfectly well with Eleven's goofy -- and, let's be honest, dorky -- charm. The hair just adds to the effect. 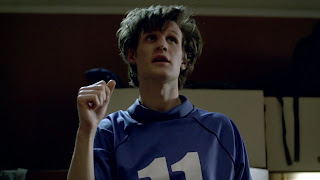 Hilariously, at first the Doctor doesn't quite understand football -- and isn't even clear on which sport it is. In an earpiece exchange with the absent, TARDIS-bound Amy, he says, "Football ... I'm good at football, I think ... Football, all outdoorsy ... that's the one with the sticks, isn't it?"

And of course he's good at it. (I heard a tale that before he went into acting, Matt Smith did want to play football before an injury ended that.) 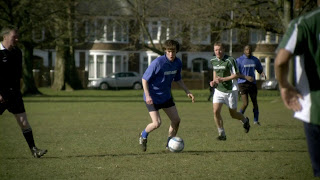 You'd have to have a heart of stone not be moved by this face when he scored. GOOOOOOAL! The other team's goalie isn't too happy, but there is something really sweet about Eleven right here. 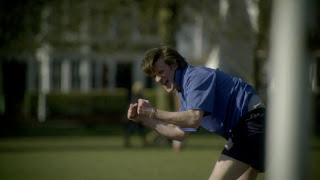 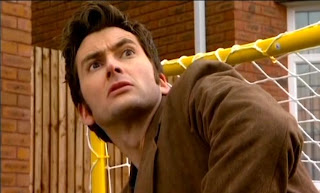 * = OK, so I was just kidding around. The image from "Fear Her" was too perfect not to use! Come on, it's Ten in front of a goal net, for goodness sake, with that look of dismayed, annoyed surprise. It could belong to any goalie caught off-guard!
Sophie (an adorable Daisy Haggard, whom you may recognize from the delightful "Man Flu" comedy video) approves. She's Craig's friend, and he fancies her but can't quite communicate that. "The Odd Couple" vibe takes on a rom-com vibe too. 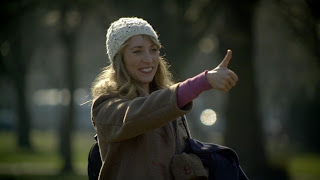 6. You just had to, didn't you, show? You just had to bring in a montage of past Doctors and hurl David Tennant's face all over my TV, didn't you? Maybe it was meant as an homage, but I caught by surprise and it was like someone jammed an icicle into my heart. But it hurt so good to see Ten, darling dearly departed Ten, so I guess Aristotle was right about catharsis and whatnot. Darn it, show, for manipulating my apparently easily manipulated emotions. 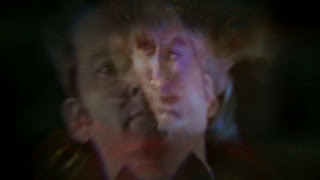 7. Remember what I said at the beginning of this post about how the story is about people? I've banged on before (and at terrible length) about characters, and the episode ended delightfully on the human level. We resolved the issue about the mysterious people-eating upstairs room, but what brought the resolution wasn't the sonic screwdriver or some tech toy or something that only the Doctor could do. Actually, it was Craig and Sophie who ended up turning the tide ... by taking the leap and confessing their love for each other. In the end, they and the Doctor emerge as friends having shared an adventure. 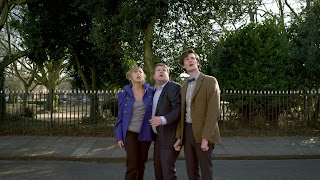 So in the end, Craig and Sophie and I can say with happy honesty ... Well, why don't I just let Craig's fridge do the talking as it appears at the end of the episode? 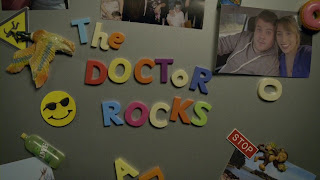 Bonus: Look at what reappears at the end, in the wall beside Craig's refrigerator? The crack is back, a reminder now that next week and the week after will be the oh-so-important finale of the season. What's going to happen when the Pandorica opens next week? 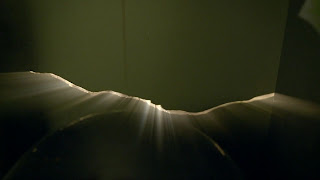 Screencap credit to Sonic Biro. Also, you can catch the episode (and all of the current season's episodes) here.

BONUS: Take a look at this absolutely fabulous bit from this episode's "Doctor Who Confidential."
Posted by Mad Minerva at 12:45 PM

Just stumbled across this today while looking for some Doctor Who pictures - fun post, will have to come back to visit this space more often!