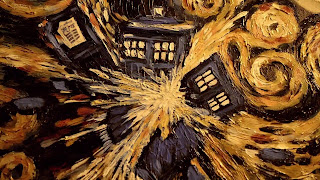 Now that the initial shock of watching part 1 of the season finale has finally worn off, now that my Whovian buddies and I have talked for hours about it, I'm all set to write up a full review in the same fashion as I did for "Vincent and the Doctor" and "The Lodger."

But, as it turns out, I don't have to because someone else has done a review that looks and feels almost exactly like I was planning to do mine. Read this -- it is a beauty! I'll just add that it ended with the best and boldest cliffhanger I've seen yet in the new Who. (OK, it was really 3 cliffhangers. Really!)

Obligatory Spoiler Warning: Oh, don't read any of this if you haven't already seen "The Pandorica Opens."

I'll just jot down what is arguably the coolest bit of fraught exposition in the episode:

There was a goblin, or a trickster, or a warrior. A nameless terrible thing soaked in the blood of a billion galaxies. The most feared being in all the Cosmos. And nothing could stop it or hold it or reason with it. One day, it would just drop out of the sky and tear down your world.

Dang. And now just stop for a moment and think about that statement.

The best line of the episode, though, has to be River Song's: "Oh, Doctor. Why do I let you out?" River is so fantastic. She's like a butt-kicking, space/time-traveling female version of Indiana Jones. I want to be like River when I grow up ... aside from the whole killing someone and getting imprisoned for it kind of thing, I mean!

Part 2 of the season finale (entitled "The Big Bang") airs tomorrow, and I'm ludicrously excited. We've come a long way since the midterm exam for this season, I daresay.

Public Service Announcement: You can expect plenty of obsessive if desultory Who-blogging this summer as a work-avoidance strategy since I have a million researchy things to do!
Posted by Mad Minerva at 7:58 PM