Couch Potato Chronicles: Part 2 of the "Doctor Who" Finale: "The Big Bang"

Part 1 had me absolutely screaming for more.  It did.  Best cliffhanger I've seen in a very long time.
Part 2 was -- unbelievably -- even more of a roller coaster that made my head explode, and I will now give Steven Moffat all the credit he deserves and say he's reached Joss Whedoneque levels of MM's idolatry.  I'll try to do a full review soon, but I really do need to see the entire two-part finale again so I can think about it.  For now, though, here is a lovely review to tide you over (spoilers if you haven't seen the episode yet!).  UPDATE: This too (also spoiler-y).

For now, though, I'll say that the show and Matt Smith have done it.  They've done what I was so very much hoping they would do: balance the clever mind games with some serious character development and a visceral connection to the audience.  I wanted it to be about the gut and heart as well as the head.

And, at long last, I got it.  (Spoiler-ish photos below the fold.)

In a way, looking back, I suppose Eleven had me from "Geronimo."  But all new Doctors need to grow into their role and to build a relationship with their audience, and it is no different for Matt Smith.  He had to win us over, and it takes time and investment.  It was no different for David Tennant when he brought Ten after Christopher Eccleston's memorable Nine. 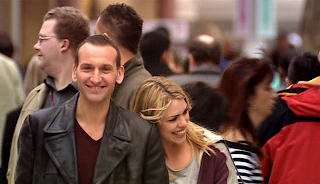 I'd been dubious and distrusting then too: "This is the new Doctor?  Barty Crouch, Junior?  This goofy skinny Scottish guy with the messy hair?  I want Nine!"  By the time Tennant departed, though -- well, you know.  I was an emotional wreck.  And I loved him and Ten and the show for making it so. 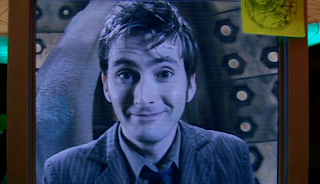 I loved that they had crafted and embodied a character who had as visceral a connection to the audience as an intellectual one.  It's this that enables the audience to engage its imagination as it never can without such a connection.  (In fact, all truly great and memorable fictional characters are alike in this way.)  It's one of the greatest abilities of fantasy/fiction -- the capacity to transport you by imagination.  Sometimes you end up in the darkest places with your character, sometimes in the happiest, and every place emotionally in between.  And you CARE WHAT HAPPENS.

I'll stop now with a few images from the conclusion of the season finale.  The first two evoke both the playful humor that makes this show so much fun and also the emotional resonance and character development that can pull your heartstrings out of your chest and play a concert on them -- a concert that you love.  The third is about giving us characters we just adore. 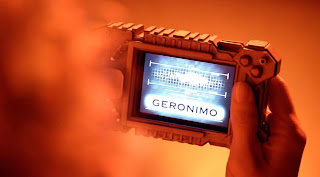 A text message from the Doctor as he takes off. 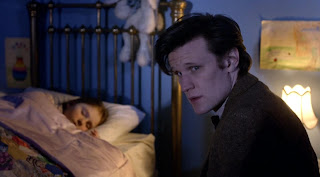 The Doctor talks to little Amelia as she sleeps.
This was the scene that finally did it.  Kudos, Eleven.
This is what I'm talking about. 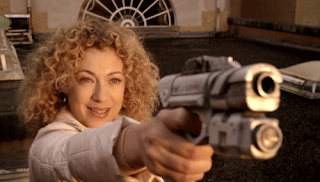 River Song.  Need I say more?
This time-traveling archaeologist could run circles around Indiana Jones.
Most awesome nerd-babe EVER.
If I could be one-tenth as awesome, I would *rule* all my Nerdmoots.
Oh, all right.  One more image.  For La Parisienne and California Dreamer.  Because we love Time Lords in fancy dress.  Who knew goofy Eleven, who with his bowtie and suspenders and elbow-patched jacket usually dressed like a crazy academic, could look so dashing? 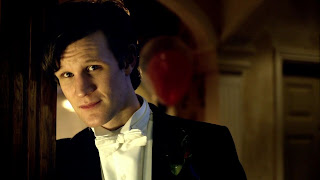 Bowtie, evening wear edition.
Yes, Eleven, you were right: Bowties ARE cool.
(Fezzes?  Not so much.  Just FYI.)
OK, I feel like I should have an addendum about emotional investment and such.  I'm not only talking about being in love with the Doctor, though that happens.  I'm not even talking about loving the Doctor, though that happens too (and, I think, rightfully).  I'm talking about really, genuinely caring what happens.  So there are my two cents' worth.  (The fact that I first liked Ten, then loved him, then fell in love with him doesn't bias me a bit, not one bit!  *wink*)
Posted by Mad Minerva at 8:39 PM

Can't wait until the Christmas special! But will we REALLY get an Egyptian goddess on the loose on the Orient Express in Space? It sounds too good to be true!